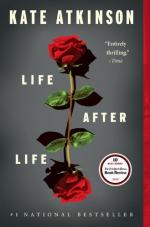 This detailed literature summary also contains Quotes and a Free Quiz on Life After Life by Kate Atkinson.

In the acclaimed novel, Life After Life, by Kate Atkinson the reader begins the novel as if they've been thrust into the middle of a novel already in progress. A young, unnamed, but beautiful woman has arrived at a small party. The year is 1930. There are military leaders there and the man she, more importantly, came to see, the supreme leader. Through a series of clues and suggestions, the reader learns that this man is Hitler. He flirts with her, as she knew he would. He has studied him, like a predator stalks its prey, and here, finally, finds herself able to get close enough to him to try and kill him. She fails and everything goes black.

The next chapter, titled Snow, takes place in 1910. A baby is being born, but it is not an easy birth. In fact, the child has come prematurely in the dead of winter, the doctor has been delayed, and Sylvie, the mother, is quite alone except for her scullery maid, Bridget. Sylvie's husband, Hugh, is away trying to track down his wayward sister who has run away to Paris. The baby is born with the cord wrapped around its neck. It's heart stops beating and it seems to die.

Luckily, Dr. Fellowes, arrives just in time to revive the child, who still doesn't have a name, and Sylvie is ecstatic that this, her third child, will live. The reader isn't told the gender of the child, only that the Doctor doesn't care for the emotional display that Sylvie gives toward the child. Later, the reader learns that Sylvie doesn't like the doctor at all and is glad when he leaves early the next morning.

Sylvie lies in bed recovering from the birth and reflects on her life before Hugh. She'd been a happy and naive little girl living in the world of the wealthy. Then, her father died an untimely death and Sylvie's world crashes down around her. As a young teenager she and her mother lose everything because of her father's gambling debts. Not too soon afterward, her mother dies, too, leaving Sylvie without many options in the world. At seventeen she meets Hugh, who is a rising star in the banking world. They marry when Sylvie turns eighteen. Though she has been 'rescued' from her poverty she still misses the old life and ways and in many ways shows herself to be resentful of the fact that Hugh cannot provide the luxury items of her childhood.

Mrs. Glover arrives with the breakfast tray. On it is a single snowdrop flower in a vase. Sylvie calls it a brave little flower to have managed to survive to bloom in the snow. Mrs. Glover thinks that Sylvie is foolish to think such things about a flower. Mrs. Glover comes back later with the children so that they can see their new sister, Ursula. Sylvie has named her Ursula because it means little she-bear. Maurice, her oldest son, is despondent because it is another girl, while Pamela is happy to have a sister. Mrs. Glover twists Maurice's ear when he reaches out to poke baby Ursula with his finger. Sylvie is upset that Mrs. Glover would dare lay a hand on her children, but she doesn't say anything. Later, Mrs. Glover turns a disdainful eye toward her when she has the baby brought to her so she can nurse it.

Hugh sends a telegram saying that he's staying on in Paris because he is having trouble locating his sister, Isobel. Sylvie can't seem to think of anything to write back to Hugh about their baby. She's worried that since the baby was oxygen deprived for a short while that there may yet be something the matter with her. She stalls off sending a response for the time being. When Bridget comes to take the breakfast tray away she asks that the snowdrop be left on her bedside table.

The time jumps ahead to 1914 and Sylvie and the girls are at the beach enjoying the day in the sun. Ursula, now four years old, is playing with Pamela down near the water's edge. Pamela drags Ursula into deep water despite Ursula not wanting to. A wave crashes over them and they are pulled out of the surf by Mr. Archibald Winton, a senior clerk at a factory in Birmingham. But it is too late, Ursula has drown.

Ursula is reborn, and this time when she goes to the beach, she refuses to go into the water, screaming for Pamela to stay out as well. This time none of them die. In a subsequent timeline, their cousin, Roland, is the one to die.

Later, there are a series of incidents where Ursula loses her life. First she goes out onto the roof to rescue a doll, then she contracts influenza from the maid at the house, then later she dies from a botched abortion, then she dies several times in the war. Later, she has a total psychotic breakdown as all of her past lives crash in on her and she doesn’t know how to sort them out.

Luckily, throughout her life there’s been a Dr. Kellet, who as told her about reincarnation. It is his steady influence and ability to calm in her down that makes Ursula realize that her ‘gift’ has been so that she can save humanity from the horror of Hitler. She kills herself, this time knowing that she will be born again.

This time she gets closer to Hitler than in any previous timeline and pulls a gun on him. She is killed before she has the chance to kill Hitler. However, when she is reborn again, this time she determines to make better choices and most of the snags that have caused her issue throughout her lifetimes are straightened out. Her brother, Teddy, is still living, and has not died in his plane. As a result, his mother has not committed suicide, and Ursula has met and married the boy she was able to give her heart to, Benjamin Cole.