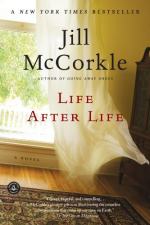 Jill McCorkle
This Study Guide consists of approximately 39 pages of chapter summaries, quotes, character analysis, themes, and more - everything you need to sharpen your knowledge of Life After Life.

Life After Life: A Novel Summary & Study Guide includes comprehensive information and analysis to help you understand the book. This study guide contains the following sections:

This detailed literature summary also contains Quotes and a Free Quiz on Life After Life: A Novel by Jill McCorkle.

Life After Life is the story of some people who live in Fulton, North Carolina, and the nursing home there called Pine Haven. A woman named Joanna Lamb works as a hospice volunteer at the nursing home and also keeps a diary of the people she has helped in the final phases of their lives. She wants to remember them both as exceptional as individuals but common in their death experiences. Joanna has been married several times and has lived a very colorful life, much to her parents' chagrin, but she returned to Fulton when her father got ill. She has stayed to run the family business, a hot dog restaurant, and also helps a young woman named C.J. with her infant son. C.J.'s mother had committed suicide so she has had no maternal guidance and is grateful to have Joanna in her life. C. J. is a beautician and does the hair and nails of the women at Pine Haven.

Some of the other residents at Pine Haven include a former attorney named Stanley Stone who puts on big displays of obnoxious behavior so that his son, Ned, won't stay any longer than necessary when visiting his father. Another attorney, widowed Rachel Silverman, is a transplant from Boston who has moved to Fulton to be near her deceased lover, and she visits the cemetery every day to talk to him. Pine Haven's darling resident named Sadie Randolph is the one who keeps the peace among the residents with her pleasant demeanor and positive outlook on life. Sadie is especially good to the 12-year-old neighbor girl, Abby Palmer, who lives next door to Pine Haven and visits every day.

Live After Life is a character-driven novel with the personalities and thoughts of the characters taking precedence over any real plot line. The stories of the people that Joanna helps transition in hospice are captured in her diary giving the book movement and capturing the characters who so want to be remembered after they are gone.

More summaries and resources for teaching or studying Life After Life: A Novel.

Life After Life: A Novel from BookRags. (c)2021 BookRags, Inc. All rights reserved.