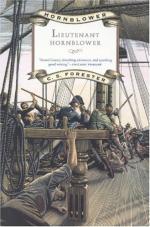 Captain Sawyer is described as having shaggy eyebrows, shaggy hair, an unkempt appearance, and a huge nose which he points about as if it were a cannon. Discuss how his physical characterization helps present him as a crazy man who is dangerous.

Would you rather serve under Captain Sawyer or Lieutenant Buckland? Would your choice differ if you were an officer or a member of the crew?

Which lieutenant is the epitome of what a Royal Navy lieutenant should embody? Hornblower, Bush, or Buckland?

After reading the novel, does the...