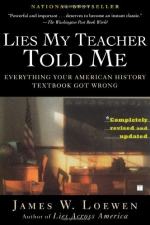 James Loewen
This Study Guide consists of approximately 60 pages of chapter summaries, quotes, character analysis, themes, and more - everything you need to sharpen your knowledge of Lies My Teacher Told Me.

Lies My Teacher Told Me Summary & Study Guide includes comprehensive information and analysis to help you understand the book. This study guide contains the following sections:

This detailed literature summary also contains Topics for Discussion on Lies My Teacher Told Me by James Loewen.

Lies My Teacher Told Me is an analysis of how high school courses in American history and, more particularly, the textbooks used in teaching them are a disservice to students and the nation the texts and courses seek to protect.

Lies My Teacher Told Me is the fruit of James W. Loewen's two years of studying and comparing the contents of a dozen high school American history textbooks and the way they are used in teaching the subject today. Loewen begins by looking at how the textbooks treat Woodrow Wilson and Helen Keller: by turning them into rather sterile heroes stripped of whatever interesting facts certain forces in society (later identified as American Legion) find objectionable and taboo. Readers are awakened to how little they know about these famous names and are alerted to the fact much of history receives this same kind of cleansing.

Loewen next sets up how race is systematically misrepresented in textbooks. Textbooks skip over the verifiable "discoveries" of America before Columbus, and paint him as a scholarly explorer, hiding his more important role in genocide and slavery. The role played by European diseases in clearing the Americas of Natives is downplayed in the Caribbean and at Plymouth, where the "Pilgrim Fathers" at Plymouth are, like Columbus, mythologized and absolved of wrong. Notably, both enjoy annual festivals that perpetuate the myths. The untold story of the sorrowful fate of Native Americans everywhere at the hands of European Americans is revealed, showing how belief in the oneness and inferiority of Indian society and frontier stories reversing the roles of aggressor and victim go unchallenged. The US would be poorer had Native Americans not made the contributions which textbooks cover up.

Having revealed the racial tension that runs throughout colonial and early US history vis-a-vis Native Americans, Loewen turns to the plight of African Americans. Racism remains invisible in the textbooks, both as it is used to justify the institution of slavery and to demand its abolition. Slavery turns overtly racial for Europeans only from the time it becomes profitable (Columbus' time), and by the 19th century, it is worth fighting for as the backbone of the South's cotton-based economy. Northern whites have bought into the notion of black inferiority, it is surprising they would join the fight. Abolitionism is made in the figure of John Brown to appear crazy, while Abraham Lincoln's position cannot be pinned down because his eloquent words are not allowed to speak for themselves. He is a moderate, wobbly on black rights, dedicated above all to preserving the Union, and, when assassinated, relegated to a pedestal. The victories of Reconstruction, limited as they are by the actions of unrepentant ex-Confederates, are turned into the defeat of carpetbaggers and scalawags, in a way that will not offend the white majority.

Other taboo subjects are similarly buried in the textbooks. Social stratification is an obvious reality that is not discussed, leaving students lost in a society that would appear to help the rich get richer and the poor get poorer - except that is not the American way. Ecology suffers the same sad fate. Post-World War II government snafus in handling foreign policy and the Civil Rights movement are portrayed as rosy government triumphs, while Vietnam and other near-current events slip "down the Memory Hole" so the story can end with uplifting, super-patriotic predictions of ongoing American progress. The result is that history, as a subject, appears irrelevant.

Having seen how history is misrepresented, Loewen turns briefly to explaining why it is handled this way. Textbook publishing is too costly a big business to risk upsetting parents, politicians, or special interest groups, so the safe pattern presented in past books is copied, thereby avoiding controversy, satisfying the majority, and turning the students off. Teachers find it safer and easier to use the approved textbooks, despite their errors, than to experiment. Many are unlettered in history and could not do so at any rate. Hope lies only in individuals who can learn how to discern historical truth in what they see and hear. This alone will create an intelligent citizenry moving forward.

More summaries and resources for teaching or studying Lies My Teacher Told Me.

Lies My Teacher Told Me from BookRags. (c)2022 BookRags, Inc. All rights reserved.