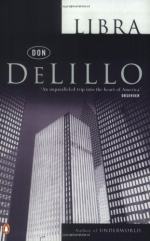 Plot Summary
+Chapters Summary and Analysis
Part 1: In the Bronx and 17 April
Part 1: New Orleans
Part 1: 26 April
Part 1: In Atsugi
Part 1: 20 May, In Fort Worth, and 19 June
Part 1: In Moscow and 2 July
Part 1: In Minsk
Part 2: 15 July, In Fort Worth, and 12 August
Part 2: In Dallas, 6 September, and In New Orleans
Part 2: 25 September, In Mexico City, 4 October and In Dallas
Part 2: 22 November, In Dallas, and 25 November
Free Quiz
Characters
Objects/Places
Themes
Style
Quotes
Topics for Discussion
Order our Libra Study Guide

Don Delillo
This Study Guide consists of approximately 35 pages of chapter summaries, quotes, character analysis, themes, and more - everything you need to sharpen your knowledge of Libra.

This detailed literature summary also contains Topics for Discussion and a Free Quiz on Libra by Don Delillo.

Libra by Don Delillo is a fictional analysis of a conspiracy behind the assassination of John F. Kennedy. In this novel, the author suggests that Lee Harvey Oswald, a confused and aimless young man, is a pawn of three CIA agents disgruntled over the bungled invasion at the Bay of Pigs. Oswald, whose disruptive childhood and devotion to Communism make him appear to be disgruntled against the American government, is chosen to be a patsy in a plot to make it seem as though Cuban leader, Fidel Castro, is scheming to kill Kennedy. Even the conspirators do not know that Kennedy is to die on that fateful day in Dallas, Texas and Oswald does not know he is not the single shooter until he sees the assassination of a president through his rifle scope. Libra is a complicated look at an often analyzed event that gives readers a sympathetic look at a traditional enemy.

Walter 'Win' Everett Jr. meets with two friends from his days in the CIA, Larry Parmenter and T-Jay Mackey. All three men have been forced out of the CIA in one way or another because of the botched invasion at the Bay of Pigs. Win has brought these men together with a suggestion of how they might be able to repair their reputations and regain their positions within the CIA. Win suggests that Kennedy would be forced to reevaluate his stance on Cuba if he believed Fidel Castro was attempting to have him assassinated. Win suggests that they plan and execute an attempted assassination on the president during a motorcade in Miami.

Win's plan includes finding a person they can manipulate and cause to appear as a disgruntled American who would be susceptible to assassinating the president on behalf of Castro. This person would fire a few shots at the president and then be arrested, giving the government someone to blame for the incident, thus protecting the three conspirators from further investigation.

After his active service in the Marines, Oswald travels to Russia and announces his intentions to defect. Oswald's petition to defect to Russia is accepted and he is debriefed regarding the U2 aircraft. When a U2 plane crashed in Russia and the pilot id recovered, Oswald is brought back to Moscow to help the Russians interrogate the pilot. Oswald soon becomes disillusioned with Russia and returns to America with his new wife and daughter. Back in America, Oswald finds it difficult to find a job to help support his family. During this time, Oswald reconnects with a friend he made in the Marines while they were both prisoners in military prison. With this friend, Oswald learns about the political stand of General Walker. Oswald and his friend, Bobby Dupard, plot to assassinate Walker. On the fateful night in April, the same night three CIA agents plot to make an attempt on Kennedy's life, Oswald takes a shot at Walker and misses.

On the day of the assassination, three trained assassins arrive on the scene. One focuses a high-powered rifle on the motorcade while another takes off for another assignment and the other waits in the car. The assassin fires at the motorcade after each of Oswald's shots. Oswald witnesses the murder of President Kennedy through his own rifle scope. Panicked, it takes a great effort for Oswald to leave the School Book Depository without arousing suspicion in a police officer searching the building. Oswald rushes to his boarding house to retrieve his handgun before his rendezvous with Ferrie at a movie theater. On his way, Oswald is stopped by a police officer. Panicked again, Oswald shoots and kills the officer.

In the movie theater, Oswald waits for Ferrie. However, Oswald is not aware that another assassin is sitting behind him, waiting for a particularly noisy moment in the movie to kill him. Before this can happen, however, police arrive at the theater and take Oswald into custody. Oswald is beaten, booked, and interrogated over and over before being paraded in front of the press. Among the press is Jack Ruby, a local strip club owner who is known as a friend to the local police. Ruby closes his clubs the weekend after the assassination in respect for his president. As Ruby grieves alone for his president, he is approached by a mob enforcer, who just days before threatened to take Ruby's clubs for outstanding debts. On this day, however, the mob enforcer offers to forgive Ruby's debts if he would assassinate Oswald. Ruby agrees, believing this will make him a hero. Instead, Ruby finds that he will forever be tied to the man who killed President Kennedy.

More summaries and resources for teaching or studying Libra.