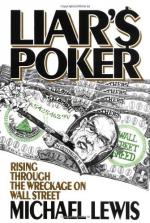 Plot Summary
+Chapters Summary and Analysis
Liar's Poker
Never Mention Money
Learning to Love Your Corporate Culture
Adult Education
A Brotherhood of Hoods
The Fat Men and Their Marvelous Money Machine
The Salomon Diet
From Geek to Man
The Art of War
How Can We Make You Happier?
When Bad Things Happen to Rich People
Free Quiz
Characters
Objects/Places
Themes
Style
Quotes
Topics for Discussion
Order our Liar's Poker: Rising Through the Wreckage on Wall Street Study Guide

Michael Lewis (author)
This Study Guide consists of approximately 36 pages of chapter summaries, quotes, character analysis, themes, and more - everything you need to sharpen your knowledge of Liar's Poker.

Liar's Poker: Rising Through the Wreckage on Wall Street Summary & Study Guide includes comprehensive information and analysis to help you understand the book. This study guide contains the following sections:

This detailed literature summary also contains Topics for Discussion and a Free Quiz on Liar's Poker: Rising Through the Wreckage on Wall Street by Michael Lewis (author).

This semi-autobiographical non-fiction work is published in 1989. Liar's Poker relates actions and events that occur primarily in New York and London from the years 1979 to 1988. Michael Lewis writes about the experiences, traits and character of managers, employees, customers and competitors of Salomon Brothers Wall Street investment bank. He writes from his own experience as job applicant, trainee and bond salesman to 1988. This short successful career account with Salomon from 1985 to 1988 is enhanced with a condensed history of the Salomon mortgage bond trading department startup from 1979. Salomon's rapid growth to the leading Wall Street mortgage bond firm by the mid-1980s is described. Salomon's loss of the bond trading led to a competitive Michael Milken's startup junk bond department for Drexel Burnham is also portrayed.

The author leaves Salomon Brothers in 1988 at twenty-seven years old for other interests. This is an insider's story of his experiences with friends and colleagues at a multi-billion dollar Wall Street investment firm. His subtitle "Rising Through the Wreckage on Wall Street" describes the story of an era when traders master a quick killing. Michael Lewis describes the center of a modern day gold rush where twenty-four-year-olds with little skill or experiences make more money than ever before trading and selling million dollar investments. Michael leaves after three successful years because he professes "it would be better to tell the story than to go on living the story."

This 249-page non-fiction book is comprised of eleven chapters plus a preface and epilogue. Chapter lengths are short with descriptive titles that are straightforward and readily understandable. Titles clearly state what the chapter is about and provide a touch of humor such as, "The Fat Men and Their Marvelous Money Machine" followed by "The Salomon Diet." Michael Lewis mixes personal experiences and technical jargon that makes the story easy to understand and a pleasure to read. The author uses literary techniques of flashback and perspective to develop reader understanding of the history and timeline. A blend of lighthearted humor and anecdote is colorful and enlivening to describe characters; i.e., bond traders that by profession and legend are a "boor" at parties. Lewis brings their personalities to life. His free-form style of telling stories before, after and within other tales could create confusing timelines that Lewis' writing approach is able to avoid.

More summaries and resources for teaching or studying Liar's Poker: Rising Through the Wreckage on Wall Street.