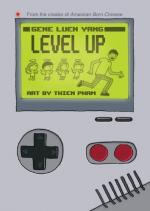 Get Level Up from Amazon.com
View the Study Pack
View the Lesson Plans
Study Guide
Order our Level Up Study Guide

Level Up Topics for Discussion

Gene Yang
This Study Guide consists of approximately 24 pages of chapter summaries, quotes, character analysis, themes, and more - everything you need to sharpen your knowledge of Level Up.

Where does Dennis see his first video game? What game was it?

Why isn't Dennis allowed to play video games like his friends? How does that impact him?

How does Dennis let his parents know he wants a game-playing system for Christmas? What game system was it? What did he get instead?

Why is Dennis suspended from college? What does he tell his mother?

Who were the "angels" who visit Dennis? What did they really represent?

What mistakes did Dennis' father make in his relationship with Dennis? How does Dennis realize that his father has regrets about their relationship?

More summaries and resources for teaching or studying Level Up.

Level Up from BookRags. (c)2022 BookRags, Inc. All rights reserved.