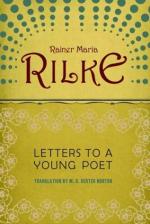 Rainer Maria Rilke
This Study Guide consists of approximately 29 pages of chapter summaries, quotes, character analysis, themes, and more - everything you need to sharpen your knowledge of Letters to a Young Poet.

According to the translator's Introduction, both Rilke and the Young Poet attended military academies in their youth, where both experienced struggle between their soul-based, poetic inclinations and their body-based, unquestioning and unemotional educations. The Introduction also comments that the man who brought them together, Professor Horacek (see "Important People") taught both men during their time at their respective military schools. In other words, military academies play important roles in the lives and creative development of both Rilke and the Young Poet.

The capital of France is one of several cities from which Rilke writes his letters. It is important to note that, for many, Paris at the time the letters were written (the early 1900's) was an important center for artistic and creative activity and innovation. Rilke wrote the first and last letters of the book from Paris. This fact may have two different symbolic...

More summaries and resources for teaching or studying Letters to a Young Poet.

Letters to a Young Poet from BookRags. (c)2022 BookRags, Inc. All rights reserved.