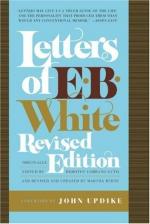 Letters of E. B. White Summary & Study Guide includes comprehensive information and analysis to help you understand the book. This study guide contains the following sections:

This detailed literature summary also contains Topics for Discussion and a Free Quiz on Letters of E. B. White by E. B. White.

Since this is a collection of letters by E.B. White over the course of his adult life as a writer, editor, husband, father and friend, there is no plot other than the unfolding of his interesting and varied life. White is known, or should be known, to every American as the author, with William Strunk, of "The Elements of Style" as well as the fictional children's books, "Stuart Little" and "Charlotte's Web." Probably few, including longtime readers of The New Yorker magazine, know that E.B. White was for 56 years in charge of that publication's "news breaks," those outlandish, absurd or just plain unintelligible mini-clippings from other publications with dry witticisms attached that were (and sometimes still are) one of the brightest spots in those pages.

Born into a family of six children in Mount Vernon, New York in 1899, Elwyn Brooks White notes in an introduction that he did not have the unhappy childhood some deem necessary for a writer and was "neither deprived nor unloved." The letters trace White's early adventures at Cornell University, a leisurely motor trip across the country with a friend and then his rather uncomfortable beginnings in the writing world at an advertising agency in New York City. After a period of time commuting to the city from his parents' home in Mount Vernon, N.Y., White moves to New York and shares an apartment with some college friends while freelancing. One of the publications that accept White's early work is the embryonic New Yorker, whose irascible editor Harold Ross eventually offers him a job doing news breaks. White finds his literary home at the magazine, as well as his future wife in fiction editor Katharine Angell.

White's office mate at The New Yorker is none other than humorist James Thurber, and they get on so well that the two collaborate on "Is Sex Necessary?", a satirical look at the sex-obsessed American culture. However, White finds the magazine confining and he yearns for the countryside and someplace compatible with his high-strung nature.

Not long after their marriage. White and Kate buy a farm in Maine from which White continues to contribute to The New Yorker while also writing a bucolic monthly column for Harper's Magazine. Kate, the divorced mother of two children, and White have a son, Joel, who becomes an acclaimed boat builder. Working as fiction editor at The New Yorker, Kate stays in an apartment in New York during the week and escapes to the farm on weekends. For five uninterrupted years, White lives and works as a farmer and writer and eventually looks back on those years as some of the best of his life although other commitments would eventually demand that he leave this peaceful setting for periods of time. His always-close touch with nature and the land provide the basis for "Charlotte's Web," among many other naturalistic fables.

However there is also something else behind the decision to live in the country. In a lengthy foreword, novelist John Updike (who was an early protégé of White at The New Yorker) mentions what White himself describes in a letter of Oct. 28, 1943 as "a nervous crack-up" which was followed by lengthy psychiatric care. In a note to his biographer, Scott Elledge, from 1982, White says his "panic fear" is not of death, but something "amorphous, lacking in form." He frequently mentions to his wife his world-weariness and need to withdraw for the sake of his artistic pursuits. White seems to have been successful in masking his psychic troubles behind a persona of the simple, good-hearted lover of nature and good writing constantly bemused by the world and its inanities.

For intermittent periods, White occasionally returns to New York City if needed at The New Yorker or for some other literary project. However, his, and Katherine's, home remains the farm in Maine where White finds a measure of serenity and the time and space to follow his artistic yearnings. The success of "The Elements of Style" and "Charlotte's Web" provide the material means for his contribution to this rural homestead, although Katherine's health declines more rapidly than his. She dies some 20 years before White, leaving him alone with his (happy) memories and advancing infirmities. He dies in 1985 at his home in Maine.

Letters of E. B. White from BookRags. (c)2022 BookRags, Inc. All rights reserved.