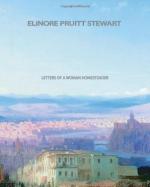 Plot Summary
+Chapters Summary and Analysis
Chapters I-III: The Arrival at Burnt Fork, Filing a Claim, A Busy, Happy Summer
Chapters IV-VI: A Charming Adventure and Zebulon Pike, Sedalia and Regalia, A Thanksgiving-Day Wedding
Chapters VII-IX: Zebulon Pike visits his Old Home, A Happy Christmas, A Confession
Chapters X-XII, The Story of Cora Belle, Zebbie's Story, A Contented Couple
Chapter XIII-XV, Proving Up, The New House, The
Chapters XVI-XVIII, The Horse-Thieves, At Gavotte's Camp, The Homesteader's Marriage and a Little Funeral
Chapters XIX-XXII, The Adventure of the Christmas Tree, The Joys of Homesteading, A Letter of Jerrine's, The Efficient Mrs. O'Shaughnessy
Chapters XXIII-XXVI, How It Happened, A Little Romance, Among the Mormons, Success
Free Quiz
Characters
Objects/Places
Themes
Style
Quotes
Topics for Discussion
Order our Letters of a Woman Homesteader Study Guide

Elinore Pruitt Stewart
This Study Guide consists of approximately 24 pages of chapter summaries, quotes, character analysis, themes, and more - everything you need to sharpen your knowledge of Letters of a Woman Homesteader.

Letters of a Woman Homesteader Summary & Study Guide includes comprehensive information and analysis to help you understand the book. This study guide contains the following sections:

This detailed literature summary also contains Topics for Discussion and a Free Quiz on Letters of a Woman Homesteader by Elinore Pruitt Stewart.

Letters of a Woman Homesteader is a compilation of letters written by a young woman named Elinore Rupert, a widow with a small daughter named Jerrine, to her former employer, Mrs. Coney. When Elinore's husband died in a railroad accident, she held down odd jobs until she heard about the possibility of getting her own homestead and being self-sufficient. So she became the housekeeper for a Wyoming rancher, a Scotsman named Clyde Stewart. The letters are all genuine, with only the smallest alterations and tell of Elinore's experiences in Wyoming between 1909 and 1913.

Mrs. Coney found the letters so fascinating and amusing that she decided to have them published in the Atlantic Monthly, which made them rather famous. They are largely short stories written by a woman who was once a writer for the Kansas City Star. Elinore's character comes out clearly in the letters; she is jovial, energetic and determined. She has her own goal of becoming a woman homesteader in a time when few believe that a woman can do the job on her own. She is always helpful and is constantly looking for a good adventure. However, most of her letters feature others prominently as the heroes of the story, which indicates Elinore's humility. Her humility is also displayed through her consistent apologizing to Mrs. Coney for late letter writing.

Elinore's life on the homestead is a surprising combination of hard work and self-made joy and leisure. Many Americans today would find the prospect of a single mother with a young daughter setting out to own a piece of land through the grueling work of clearing trees, maintaining a garden and constructing a house practically unimaginable. But nothing would stop Elinore; in fact, the book ends as she achieves her homesteading dream. Elinore also marries Mr. Stewart after a few short (six) weeks on the homestead and somehow gets along with him fairly well and comes to adore him over time. They have four sons together, though one died at birth. Elinore also makes friends with locals, like Mrs. Louderer, Mrs. O'Shaughnessy, Zebbie and Gavotte, along with welcoming anyone and everyone in the area. She even spontaneously organizes several weddings by making clothes, cooking food and picking flowers.

There are twenty-six letters in Letters of a Woman Homesteader. There is not exactly an overarching plot, as the book really is a series of short stories. However, to some extent, the book is organized around Elinore's aim of achieving her own homestead; in fact, the twenty-sixth letter, "Success", explains to Mrs. Coney how she has achieved her goal. Many of the letters explain parts of the story, though Elinore outlines her personal life sporadically throughout the book. Elinore Rupert Stewart, however, manages to have a fascinating life and personality in a time and place that seems to speak against the possibility that such a person could exist.

More summaries and resources for teaching or studying Letters of a Woman Homesteader.

Letters of a Woman Homesteader from BookRags. (c)2022 BookRags, Inc. All rights reserved.