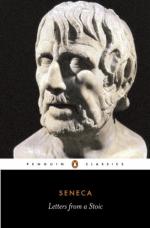 Seneca the Younger
This Study Guide consists of approximately 26 pages of chapter summaries, quotes, character analysis, themes, and more - everything you need to sharpen your knowledge of Letters from a Stoic Epistulae Morales Ad Lucilium.

Philosophy is the love of wisdom. For Seneca, philosophy is primarily concerned with figuring out how to live one's life well.

Philology is the study of words. Seneca uses this term to deride those philosophers who spend all their time quibbling over arguments instead of reflecting on how one ought to live.

Rome is the capitol city of the Roman Empire. Seneca describes the city as polluted and unclean. He also condemns its moral frailty and says that a wise man would do well to avoid it.

Stoicism is a system of philosophy derived from Greek philosophers, particularly Zeno. The philosophy advocates developing a character which is calm and peaceful regardless of what adversity one encounters. It emphasizes living in accordance with one's rational nature.

Epicureanism is a philosophy which derives much of its substance (and name) from the Greek philosopher Epicurus. Though...

More summaries and resources for teaching or studying Letters from a Stoic Epistulae Morales Ad Lucilium.