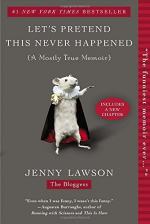 Let’s Pretend This Never Happened: A Mostly True Memoir is written by Jenny Lawson, a well-known blogger who writes under the name The Bloggess. Jenny grows up in West Texas with a patient, kind mother and a father whom Jenny lovingly describes as crazy. For example, her father once made a puppet out of a recently killed raccoon, an event which traumatized Jenny for years. Although Jenny later comes to attend high school with kids she has known all her life, she feels like a misfit and is very awkward in social situations. Jenny will only later come to be diagnosed with a severe anxiety disorder.

When Jenny attends college, she meets a young man named Victor at a bookstore. Victor is a few months older, wealthy, looks like Neil Patrick Harris, and is a Young Republican. He is the exact kind of guy that Jenny would never date. However, she makes an exception. She and Victor quickly fall in love with one another. Jenny is especially thrilled that Victor does not laud his wealth over anyone and does his best to fit in with her family. For example, Victor does not complain –though he does later admit to being terrified –when Jenny’s father drops a live bobcat on his lap for laughs. Victor even goes so far as to make Jenny’s father an Indian medicine bag featuring the actual face of a wolf, which her father ends up loving. Jenny is also thrilled that Victor accepts her own quirky humor and behavior, something which will only increase in coming years.

Victor and Jenny get engaged, get married, and move to Houston for Victor’s job. They travel home to West Texas frequently. During each visit, Jenny is alarmed at how quickly the place is changing. Fields are being taken over by subdivisions, while Starbucks are popping up in small towns. Jenny realizes the place she once knew as home no longer exists. However, she also recognizes that home is wherever Victor is. Jenny and Victor decide to have children. Due to a blood clotting disorder, Jenny must take medicine in order to carry a baby to term. She ultimately gives birth to a healthy baby girl named Hailey. With both her and Victor now working from home, the family moves back to West Texas.

As Jenny is diagnosed with anxiety disorder and turns to the internet to blog, she begins to make friends online, including those like Laura whom she will actually hangs out with in public. Jenny begins to make other blogger friends, whom she comes to appreciate and value because they are so non-judgmental of one another. At the same time, Jenny is diagnosed with rheumatoid arthritis. Sometimes, the arthritis keeps her bedridden for days. In situations like this, Jenny comes to appreciate even the small things, such as her daughter cuddling with her to keep her company while watching Little House on the Prairie reruns. Jenny also comes to appreciate her husband’s patience and good humor, such as when he tells her not to buy any hand towels since she has just purchased new ones. He comes home with a giant metal rooster instead. As Jenny concludes her book, she explains she is thrilled with her life and her family. She tells readers to embrace the absurdities of their lives and their own human nature as well.