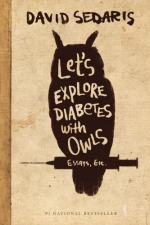 Related Topics
Barrel Fever: Stories and Essays
Dress Your Family in Corduroy and Denim
Holidays on Ice
Me Talk Pretty One Day
Naked

David Sedaris
This Study Guide consists of approximately 46 pages of chapter summaries, quotes, character analysis, themes, and more - everything you need to sharpen your knowledge of Let's Explore Diabetes With Owls.

This book is the latest in a series of publications that collect the writings of American satirist / memoirist David Sedaris in book form. A world-renowned columnist and broadcaster, Sedaris’ pieces (both fiction and non-fiction, the sort of work which is the primary focus here) tend to be short, concise, and while occasionally somewhat rambling in style, ultimately anchored by a particular discovery, perspective, or insight.

The writings in this collection fall into a few broad categories. The largest category is the type of essay in which the author uses contemplations, or analysis, of relatively contemporary experiences as a springboard to explore similar experiences in the past; connections between past and present; and aspects of each that can be understood more clearly as a result of understanding the other. Examples of essays in this category include “Memory Laps” (which uses a re-awakening of the author’s interest in swimming as a jumping-off point for contemplations about his childhood experiences as a competitive swimmer) and “A Friend from the Ghetto” (which uses an interaction with a telephone solicitor, seemingly based in a disadvantaged foreign country, as a trigger for examination of the author’s experiences trying to enforce a friendship between his childhood self and a young black girl.

A secondary, but still significant, category of writing has to do with the author’s exploration of various aspects of travel – from the challenges associated with learning foreign languages (“Easy Tiger”), to the shock and surprise often associated with learning of a country’s hygiene and dietary practices (“#2 to Go”), to the trials and tribulations of trying to get a replacement passport ("A Cold Case”).

Then are the essays in which the author examines the history of his difficult relationship with his father, essays which sometimes fit into one of the other categories (i.e. “Memory Laps”) but which are sometimes more stand-alone essays. These include “Standing Still” (in which the search by the author’s father for a man who attempted to assault the author’s sister turns both comic and poignant) and, perhaps most notably, “The Happy Place”. In this essay, a medical procedure undergone by the author leads him, perhaps surprisingly, to a conversation with his father in which the latter reveals a compassionate, affectionate side that the author, it seems, has been searching to connect with all his life.

A final category of writing found in this collection is the fiction pieces. Whereas most of the essays are defined by their apparent grounding in the author’s real life experiences and considerations of those experiences, the fiction pieces (“A Quick Email”, “I Break for Traditional Marriage”, and “Mind the Gap” among others) have a more satirical, edgy bent. That is, their focus is less on telling a story, illustrating the author’s experience, and/or triggering self-exploration in the reader than on making pointed, often negative comments about particular aspects of American social and political life. Most often, the targets of those satirical comments are connected to the American right wing – more specifically traditional, often Christian, conservatives.

The overall tone of the collection, no matter what category an individual piece of writing might fall into, is humorous and clever. There is the strong sense that the author's primary point is to entertain and engage - and if a little thought, a little insight, or a little outrage is provoked, that's part of the fun.

More summaries and resources for teaching or studying Let's Explore Diabetes With Owls.