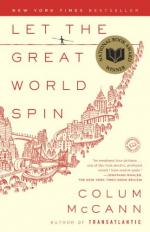 Colum McCann
This Study Guide consists of approximately 38 pages of chapter summaries, quotes, character analysis, themes, and more - everything you need to sharpen your knowledge of Let the Great World Spin.

This detailed literature summary also contains Topics for Discussion on Let the Great World Spin: A Novel by Colum McCann.

"Let the Great World Spin," a novel by New York Times Bestselling author, Colum McCann, is a novel that follows the lives of several different characters who all either witnessed or heard about one event - a tightrope walker walking between the World Trade Center buildings in August 1974 - and whose lives become interconnected in one way or another.

Chapter 1 introduces John Andrew Corrigan, known as Corrigan, and his older brother Ciaran, whose name is not revealed until later in the book. As the story progresses, the reader will see that Corrigan and Ciaran were somehow involved in most of the other characters' lives throughout the book. The first chapter is told through Ciaran's point of view as he shares background information about his childhood, Corrigan's childhood in Dublin, and Corrigan's road to becoming a priest and working with prostitutes in New York City. Chapter 1 also reveals that Corrigan was in love and having a relationship with Adelita, which was something that caused much conflict for him. Chapter 1 ends with Corrigan dying in a car accident with one of the prostitutes he often helped, Jazzlyn.

Chapter 2 is written from the perspective of Claire, a well-to-do judge's wife who is hosting a meeting at her house for a group of mothers who all lost sons in the Vietnam War. Claire's connection to other characters becomes apparent later in the book.

Chapter 3 is written from the perspective of Lara, a married artist who is a recovering drug addict. Robert was driving the car that causes the accident that killed Corrigan and Jazzlyn. Lara is deeply affected by the accident and attends Jazzlyn's funeral where she meets Ciaran. Chapter 3 ends with a suggestion that Lara and Ciaran are falling in love.

Chapter 4 introduces the tightrope walker's perspective or the amount of work he put into preparing his big walk and how he feels when walking in the air. Chapter 5 is written from the perspective of a 14-year-old person, Fernando, who took a famous picture of the walker during his walk. This photo will eventually connect Fernando to Jazzlyn's daughter, Jaslyn.

Chapter 6 is told through the eyes of four computer programmers or hackers in California who have heard about the walk and speak to various New Yorkers by calling pay phones close to the World Trade Centers. Chapter 7 is recounted through the perspective of another prostitute helped by Corrigan, Tillie, who is also Jazzlyn's mother. She shares her life story of becoming a prostitute, feeling guilty about the life that she gave Jazzlyn and feeling unable to live with the possibility that she could do the same to Jazzlyn's daughters. The chapter ends with an insinuation that Tillie committed suicide while in jail.

Chapter 8 is more of the walker's perspective. He is still unnamed but he shares more of his background, about the stunts he performs on his big walk, and his arrest following his walk. Chapter 9 introduces the perspective of Judge Solomon Soderberg, Claire's husband, a disillusioned judge who receives the walker's case in court, along with the cases of Jazzlyn and Tillie Henderson.

Chapter 10 comes from the perspective of Adelita, the woman with whom Corrigan was in love and developing a relationship. Chapter 11 is recounted from the perspective of Gloria, a woman who was part of the woman's group in Chapter 2. The chapter reveals that she becomes good friends with Claire, finds out what happened with Claire's husband, and ends up fostering Jazzlyn's two young daughters.

Chapter 12 ends the book through the eyes of Jaslyn, daughter of Jazzlyn, the prostitute helped by Corrigan. Jaslyn's story reveals that she had an extremely close relationship with Claire and that she visited Ciaran who is now married to Lara in Ireland. Tillie died in the jail cell. One of her most precious belongings is a picture taken of the tightrope walker because it was taken the same day that her mother died. The book ends with Jaslyn lying in bed with a sick Claire, thinking about the world continues to spin no matter what happens.

More summaries and resources for teaching or studying Let the Great World Spin: A Novel.