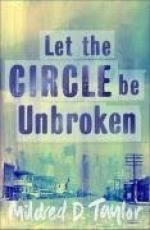 Mildred Taylor
This Study Guide consists of approximately 43 pages of chapter summaries, quotes, character analysis, themes, and more - everything you need to sharpen your knowledge of Let the Circle Be Unbroken.

Let the Circle Be Unbroken Summary & Study Guide includes comprehensive information and analysis to help you understand the book. This study guide contains the following sections:

This detailed literature summary also contains Topics for Discussion and a Free Quiz on Let the Circle Be Unbroken by Mildred Taylor.

Let the Circle Be Unbroken is a story of a small Mississippi town in the 1930s, and the troubles that plague its black community. Picking up where its precursor, Roll of Thunder, Hear My Cry, leaves off, Mildred Taylor recounts the trials of this small community through the characters of the Logan family. More specifically, it focuses on the children of the family; Stacey, Cassie, Little Man and Christopher. This family struggles with the changing world around them, living the hard and poor life of farmers, and in the end, realizing what really matters in life.

As seen through the eyes of Cassie, a preadolescent girl who is growing up in a turbulent time, the story opens with the impending trial of TJ Avery. TJ, a young black man and friend of Stacey, is accused of murder and must stand trial. He is found guilty and sentenced to death for a crime he clearly did not commit.

Meanwhile, the Logan family is facing its own problems. As the only black landowners in town, Mama and Papa are chronically worried about the taxes they must pay. To earn extra money, Papa ventures south to work on the railroad. While he is gone, major events unfold, and the Logans face numerous challenges.

The trouble begins in the schoolyard, when Cassie directly disobeys her father, and Stacey huddles in private conversations with boys who dream of more than they have. More is revealed about the life of the farmer here, and the entire community of sharecroppers almost always convenes here, as it is on the same grounds as the church. They discuss problems in the fields, and the struggles they must face.

Mama's cousin, Bud, begins the unraveling of the Logans' values by announcing his marriage to a white woman. To boot, the couple has a daughter, and with a mixed background, she is struggling to find her own identity. She is sent to live on the Logan farm to learn about her heritage. It is there that she discovers the dangers that she faces. When a white boy shows an interest in her, she threatens her own safety by pretending to be white. And as the only other young female in the house, she is greeted by Cassie's feelings of jealousy and contempt.

She is not the only teenager going through an identity crisis, though. Stacey, the eldest son, is struggling to become a man. He feels that in order to do so, he must take actions beyond growing a mustache and distancing himself from his younger siblings. He wants to get a job, but his own mother's reluctance to approve such an act leaves Stacey to devise a secret plan. He will put himself into unspeakable danger to make his living, and he will send his entire family into a tailspin of worry and distress.

More summaries and resources for teaching or studying Let the Circle Be Unbroken.

Let the Circle Be Unbroken from BookRags. (c)2022 BookRags, Inc. All rights reserved.