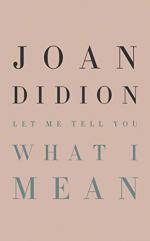 Summary
+Chapters Summary and Analysis
"Alicia and the Underground Press" - "A Trip to Xanadu"
"On Being Unchosen by the College of One's Choice" - "Fathers, Sons, and Screaming Eagles"
"Why I Write" - "Telling Stories"
"Some Women" - "The Long-Distance Runner"
"Last Words" - "Everywoman.com"
Important People
Objects/Places
Themes
Styles
Quotes
Topics for Discussion
Order our Let Me Tell You What I Mean Study Guide

Joan Didion
This Study Guide consists of approximately 36 pages of chapter summaries, quotes, character analysis, themes, and more - everything you need to sharpen your knowledge of Let Me Tell You What I Mean.

What does Didion primarily admire about the underground press?

In "Alicia and the Underground Press," Didion praises the underground press for being unabashed about the opinions of its writers, thus exposing authorial bias but allowing the reader to form their own opinion with that information in mind. For Didion, writing that pretends not to have any bias at all inherently clouds or skews the truth, whereas writing that is open about its leanings or purpose is more truthful.

Why does the trip to Hearst Castle, San Simeon make Didion feel regretful in "Trip to Xanadu"?

Didion becomes saddened, at the end of "Trip to Xanadu," by the realization that her own image of Heart Castle in San Simeon was more lyrical and powerful when it remained just that -- a mental image -- and that it had lost some of its magic the moment she laid eyes...

More summaries and resources for teaching or studying Let Me Tell You What I Mean.

Let Me Tell You What I Mean from BookRags. (c)2022 BookRags, Inc. All rights reserved.