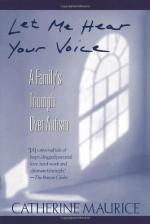 Let Me Hear Your Voice: A Family's Triumph Over Autism Summary & Study Guide

Catherine Maurice
This Study Guide consists of approximately 33 pages of chapter summaries, quotes, character analysis, themes, and more - everything you need to sharpen your knowledge of Let Me Hear Your Voice.

Let Me Hear Your Voice: A Family's Triumph Over Autism Summary & Study Guide includes comprehensive information and analysis to help you understand the book. This study guide contains the following sections:

This detailed literature summary also contains Topics for Discussion and a Free Quiz on Let Me Hear Your Voice: A Family's Triumph Over Autism by Catherine Maurice.

Let Me Hear Your Voice: A Family's Triumph Over Autism by Catherine Maurice is a heart-wrenching story about a family's struggle to help two of their children, Anne Marie and Michel, recover from autism. Diagnosed early, both children were given little chance of success, but through a combination of behavioral therapy and sheer will, their family and therapists helped them to achieve normalcy. It is a story of pain, struggle, love, and faith that lends hope to families of autistic children throughout the world.

Catherine Maurice, a devoted mother of Daniel, gives birth to Anne Marie, and all is well for several months. When Anne Marie is a year and a half, her parents begin to notice disturbing behaviors, such as a general withdrawal from others, repetitive behaviors, a lack of language skills and an overall sense of terror about change that cause them to begin looking for answers. Soon, they receive the diagnosis of autism, and are drawn into a world of despair and anguish. Professionals disappoint them with consistently little hope, but Catherine challenges the system and begins hunting on her own for solutions. She discovers the world of behavioral therapy, and although reluctant to try such extreme measures, she hires Bridget, a sincere therapist, to work with Anne Marie. In addition, she finds Dr. Welch, a supporter of holding therapy. With rigorous training, Anne Marie begins to recover. Originally believing holding therapy is the key, Catherine is eventually convinced that Dr. Welch is a self serving therapist with little to offer, and that it is in fact Bridget and Robin, the speech therapist, who are succeeding in bringing Anne Marie back to the world. Through her faith and through behavioral therapy, Catherine and the others are able to wench Anne Marie from autism, and watch as she slowly regains her sense of normalcy. When things are finally beginning to improve in the family, Catherine begins to worry about her next child, Michel. More outgoing and social than Anne Marie, the concerns are at first limited. But as Michel begins showing many of the same symptoms, the family has no choice but to take Michel in for testing. Soon after, they receive the devastating news that he too is autistic. The family, heartbroken, again journeys to save their son with the same behavioral therapy, and again achieves success.

The novel is not only a support of behavior therapy, but also serves as an attack on many conventional beliefs about the hopelessness of autism. Catherine, through her own painful journey, shows other families there is hope, and that to question those who believe they know best is vital to the success of their children. This is not only a story of faith and hope, but also a story of strength and the overwhelming power of love in overcoming adversity.

More summaries and resources for teaching or studying Let Me Hear Your Voice: A Family's Triumph Over Autism.

Let Me Hear Your Voice: A Family's Triumph Over Autism from BookRags. (c)2022 BookRags, Inc. All rights reserved.