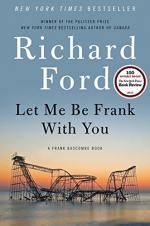 Plot Summary
+Chapters Summary and Analysis
Story 1: I'm Here
Story 2: Everything Could Be Worse
Story 3: The New Normal
Story 4: The Deaths of Others
Free Quiz
Characters
Symbols and Symbolism
Settings
Themes and Motifs
Styles
Quotes
Order our Let Me Be Frank With You Study Guide

Let Me Be Frank With You Summary & Study Guide

Richard Ford
This Study Guide consists of approximately 50 pages of chapter summaries, quotes, character analysis, themes, and more - everything you need to sharpen your knowledge of Let Me Be Frank With You.

Let Me Be Frank With You Summary & Study Guide Description

Let Me Be Frank With You Summary & Study Guide includes comprehensive information and analysis to help you understand the book. This study guide contains the following sections:

This detailed literature summary also contains Quotes and a Free Quiz on Let Me Be Frank With You by Richard Ford.

Let Me Be Frank With You by Robert Ford is the fourth novel about retired real estate agent Frank Bascombe. The four short stories that comprise the novel each deal with a different facet of life and how Frank deals with other people around him as they all face the aftermath of Hurricane Sandy. This is a collection of short stories showing Frank's views on aging and the culture around him as he encounters old friends and meets new ones with stories of their own.

In "I'm Here", Frank comes face to face with the destruction caused by Hurricane Sandy. Former client Arnie Urquhart calls Frank to complain that the house Frank sold him years ago has been totally destroyed by the hurricane. Arnie wants advice on how he should proceed with the property as he has been recently contacted about selling the property. Frank is at first agitated that he has been called as he feels that there is nothing he can do and that it is Arnie's decision, but Arnie wants to meet with Frank anyways. Reluctantly, Frank agrees although he is a bit concerned for his own safety. Frank drives to his former home but is stopped at the beginning of the street by a police officer, who is also a former client of Frank's. After a brief chat, the officer allows Frank to go on down Poincinet Road to his former home. Frank waits for Arnie but Arnie is late, giving Frank time to rethink his decision. Before anything can be done about it, Arnie shows up outside of Frank's car wanting Frank to walk with him. After a lengthy discussion about change and how others have survived the storm, Arnie agrees that this is the best time to sell the house as there is nothing that can be done for it. Frank realizes that the only thing Arnie really wants is someone to talk to and be there for him in making this decision.

Frank encounters a former resident of his home in "Everything Could Be Worse". As Frank is returning home from reading to the blind at the local radio station, he notices a woman standing on his front porch. She introduces herself as Charlotte Pines and informs Frank that she lived in his house many years ago. Charlotte would like to see the inside of the house for nostalgia's sake and Frank lets her in. While Frank is downstairs in the kitchen, Charlotte takes a tour of the upstairs of the home. When she comes back down, she and Frank share a cup of coffee. While they are drinking, Charlotte reveals the real reason she is there. She is seeking closure from a tragic event that occurred in the house, causing her to unexpectedly leave it. Charlotte tells Frank that when she was in high school, her father murdered her mother and her brother before committing suicide. Charlotte is surprised that Frank has had no prior knowledge of this, but Frank is glad that Charlotte has shared her story with him. Once she is finished, the pair find themselves becoming friends as they share the same philosophies on life and happiness.

"The New Normal" follows Frank as he makes a visit to his ex wife, Ann, at a local assisted living facility. Ann has been living at the facility following the death of her second husband and since learning she has Parkinson's disease. Frank has been visiting her regularly since she has moved in. On this visit, Frank is bring her a Christmas present of an orthopedic pillow to help her be comfortable. As it is also his current wife's birthday, Frank wants to make the visit as quick as possible and to avoid any arguments with Ann. Frank uses a method he calls his "Default Self", a way of acting truthfully yet kindly as it is a way he truly perceives himself. As Frank and Ann chat, the conversation is generally pleasant, except a moment where they discuss death and where they want to be buried. Ann wants to be buried next to their son, Ralph, but Frank is undecided as to what he wants to do. The visit is called to a halt when Ann gently tells Frank that is time to leave as she has began to have a slight muscle spasm. Frank hugs Ann goodbye, satisfied that they have had such a pleasant visit.

The final story is "The Deaths of Others". Frank is listening to the local radio station talk show when he hears an old familiar voice as one of the callers. It is a man named Eddie Medley who says that he is dying and he gives his views on the importance of Hurricane Sandy. Shortly after, Frank's wife Sally says that there is a message on the answering machine for Frank from an old friend. Frank learns that the message is also from Eddie and Frank reminisces about Eddie. Eddie wants Frank to call him sometime, as he is dying and wants to hear from a familiar person. On Christmas Eve, Frank goes to visit Eddie, foregoing his plans of packing for his Christmas day trip to see his son, Paul. Frank is very uneasy about this visit as he is faced with dealing with Eddie's impending death. Frank and Eddie spend a short amount of time talking about the past and making some jokes, although the conversations end quietly. After a brief period of awkward silence, Eddie informs Frank that he has a confession to make. Eddie confesses that he had an affair with Ann towards the end of Frank's marriage to Ann. Frank is too shocked to have a reaction to this as Eddie continues to tell Frank that he was in love with Ann at one time and wanted to marry her, but Ann said that she was still in love with Frank. Frank is ready to leave at this point and he gets his opportunity to exit Eddie's house quietly as the phone rings. Once Frank leaves the home, he shares a brief word with the gas meter reader, causing Frank to feel better and gives him the ability to move on with his day.

More summaries and resources for teaching or studying Let Me Be Frank With You.

Let Me Be Frank With You from BookRags. (c)2022 BookRags, Inc. All rights reserved.