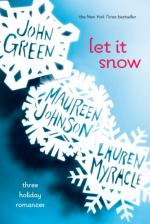 John Green
This Study Guide consists of approximately 53 pages of chapter summaries, quotes, character analysis, themes, and more - everything you need to sharpen your knowledge of Let It Snow.

Three interconnected love stories in the novel Let It Snow: Three Holiday Stories by Maureen Johnson, John Green and Lauren Myracle, combine a blizzard, cheerleaders, broken hearts and girl-crazy guys to result in unlikely Christmas miracles. The stories are set in Gracetown beginning Christmas Eve night. A bad snowstorm has hit the area changing the landscape and causing the train on which Jubilee, along with fourteen cheerleaders from Pennsylvania are riding. Fun, hair-raising adventures result.

In “the jubilee express,” the authors do not capitalize chapter titles, when Jubilee’s parents were arrested Christmas Eve for being part of a riot, Jubilee had to take a train to her grandparents’ house in Florida. Instead of getting to Florida, however, the train was caught in a blizzard near a town called Gracetown. Jubilee never expected the walk from the train to a nearby Waffle House would lead her to a new love.

In “a cheertastic christmas miracle,” the Duke and Tobin had always been close despite the fact she was a girl and he was a boy. On a Christmas Eve night trek through a blizzard, Tobin noticed the Duke was increasingly frustrated by his references to cheerleaders. Fourteen cheerleaders on their way to a competition had also been on the train on which Jubilee had been riding. The cheerleaders had walked from the train to the Waffle House where Tobin’s friend Keun was working. Believing he was in the middle of heaven, Keun had shared his good luck with Tobin and invited him to come as well. At the restaurant, however, Tobin realized he was more interested in the Duke than the cheerleaders.

In “the patron saint of pigs,” Addie has to learn the hard lesson that everything was not always about her. In order to prove she has learned her lesson, Addie went to Pet World to pick up Tegan’s new pet pig, even though Nathan, a boy whom Addie did not like, worked there. At the pet store, Addie learned Nathan had accidentally already sold the pig. Addie tracked down the person who purchased the pig and discovered an elderly lady whom she had waited on earlier that day at Starbucks. The woman, who Addie thought was crazy, had told Addie she was her Christmas angel.