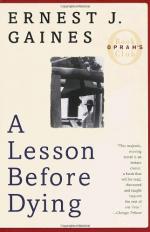 Miss Emma, Tante Lou and Reverend Ambrose visit Jefferson in the day room. Initially Jefferson refuses to go to the day room, when he is told he cannot take the radio with him. When Bonin tells them about Jefferson's reluctance to leave his cell because of the radio, they see him in his cell. When Bonin returns to the cell, he tells the visitors that Sheriff Guidry wants to see them.

In the office, Guidry offers to have the radio removed; but Miss Emma says that there are no problems. Guidry asks why Miss Emma and her companions did not mind standing in Jefferson's cell today, when they minded enough in the past to seek his wife's intervention. Miss Emma does not really reply.

Guidry points out that Jefferson has little time left to live, and again says that he does not want...