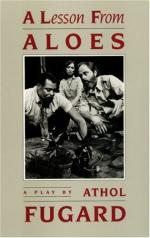 A Lesson from Aloes Discussion Questions

Athol Fugard
This Study Guide consists of approximately 23 pages of chapter summaries, quotes, character analysis, themes, and more - everything you need to sharpen your knowledge of A Lesson from Aloes.

Read Fugard's Master Harold . . . and the Boys and compare its treatment of race relations in South Africa to those in A Lesson from Aloes. Does Fugard raise any new points in Master Harold about the tensions that arose between blacks and whites living under apartheid? Write a comparison and contrast paper on the two plays.

Fugard reveals the incident when the police took Gladys's diaries only as a memory. Write a new scene that could be added to the play that would depict this important event, noting Gladys's sense of betrayal and the beginning of her descent into madness.

Research the subject of race relations in the United States during the 1960s and compare your findings to conditions in South Africa during the same period. What do you think accounted for the differences? Present a PowerPoint presentation on your findings.

More summaries and resources for teaching or studying A Lesson from Aloes.

A Lesson from Aloes from BookRags. (c)2022 BookRags, Inc. All rights reserved.