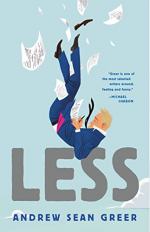 Sean Greer, Andrew
This Study Guide consists of approximately 36 pages of chapter summaries, quotes, character analysis, themes, and more - everything you need to sharpen your knowledge of Less.

The following version of this book was used to create this study guide: Greer, Andrew Sean. Less. Little, Brown and Company, 2017.

The novel opens on Arthur Less, a 49-year-old novelist whose love life and professional life are both undergoing difficulties. Arthur lives and works in San Francisco, California. After having a moderately successful debut novel published decades ago, his recent novels experienced less success. The novel that Arthur recently finished writing, entitled Swift was just rejected by his publisher. In addition, his ex-lover, Freddy Pelu, will soon marry to another man. Arthur still has feelings for Freddy, so when he received an invitation to Freddy’s wedding, he decided to accept several invitations to events in other countries as an excuse for not attending Freddy’s wedding. His extended trip begins in New York City, where he agrees to interview the successful science-fiction writer, H.H.H. Mandern.

After New York City, Arthur goes to Mexico City, to speak at a literary conference dedicated to the works of renowned writer Robert Brownburn. Arthur and Robert had had an extended romantic relationship when Arthur was in his twenties and when Robert was in his fifties. In Mexico City, Arthur is horrified to learn that he is schedule to speak alongside Marian Brownburn, Robert’s ex-wife, whom Robert had divorced after meeting Arthur. However, due to a broken hip, Marian is not able to attend the conference. After Mexico, Arthur goes to Turin, Italy, where he has been nominated for a literary prize. Arthur does not expect to win. He mentally recalls the last time he was nominated for an award. It was an award for LGBT literature. Arthur did not win, and the author Finley Dwyer, one of the speakers at the ceremony, indirectly castigated Arthur for writing literature that was actually harmful to the LGBT cause. In Turin, Arthur is surprised when he wins the award.

Arthur then goes to Berlin, Germany, where he has agreed to teach a course on literature and creative writing. Arthur’s German is not very good, and he is not an experienced teacher, but he gives his best effort at teaching. Several students appear to collapse in class due to a spreading illness. At one point, Arthur gives a literary reading at a Berlin nightclub, and several spectators collapse. Arthur concludes that he has been boring people into mild catatonic states with his bad German and poor presentation style. Arthur then heads to Morocco, but he has an extended layover in Paris first. A friend of his living in Paris invites him to a party. There, he encounters Finley Dwyer, who reemphasizes his criticism of Arthur’s literature. Arthur does his best to ignore the criticism. Arthur eventually arrives in Morocco, where he meets up with an old friend of his named Lewis. Arthur is surprised to learn that Lewis and his husband Clark are divorcing, but not due to any marital strife. They simply wish to explore other relationships.

Arthur then goes to India, where he stays in a relatively secluded religious compound and begins to rewrite his novel. However, he is repeatedly bothered by visitors who reside in the compound. Arthur eventually has a fall and fractures his ankle. He is taken to a hospital, where he recovers while continuing his revisions. After India, he goes to Japan, which is the final stop on his international journey. He continues rewrite, but he receives a message from Marian Brownburn saying that Robert has suffered a stroke. Arthur sets up a video chat to talk to Robert and Marian. Arthur tells Robert that he will come back to San Francisco immediately to see Robert. With only one chapter left to rewrite in his novel, Arthur goes back to San Francisco. When he arrives at his home, he sees that his porch light is on and that Freddy is waiting for him. Freddy’s marriage lasted only one day before he realized that he still loved Arthur, and so Freddy has come to declare his love for him.

More summaries and resources for teaching or studying Less.