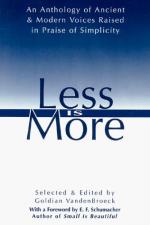 Less Is More: The Art of Voluntary Poverty: An Anthology of Ancient and... Summary & Study Guide

Less Is More: The Art of Voluntary Poverty: An Anthology of Ancient and... Summary & Study Guide Description

Less Is More: The Art of Voluntary Poverty: An Anthology of Ancient and... Summary & Study Guide includes comprehensive information and analysis to help you understand the book. This study guide contains the following sections:

This detailed literature summary also contains Topics for Discussion and a Free Quiz on Less Is More: The Art of Voluntary Poverty: An Anthology of Ancient and... by Goldian VandenBroeck.

"Less Is More," which is an anthology of ancient as well as modern voices, praises the concept of simplicity—living the simple, unencumbered life. By having "less" material possessions, man has "more"—more time to think, to learn, to create and to grow spiritually. The quotations are selected and edited by Goldian VandenBroeck. Editor VandenBroeck begins the anthology by prefacing its main theme and purpose which is finding the real value and worth of life by the denunciation of wealth and all its trappings.

Voluntary poverty is an ideal state as it is a chosen status and frees one from the burdens of gaining wealth and the concerns and worries about losing it. Such poverty is not to be confused with destitution, which is a state that is not chosen but rather a miserable existence that is inflicted upon one. The destitute people of the world need the help of the strong who have denounced their wealth and who are free to help the less fortunate. St. Francis of Assisi loved and honored voluntary poverty and lovingly dubbed it Lady Poverty, a thinly veiled reference to Lady Madonna. St. Francis' movement was important and gathered great support and thousands of followers who emulated St. Francis' vow to poverty. Gandhi, who famously gave up all wealth and possessions, is often quoted and offers advocacy based on his own experiences on the fulfilling life that is possible through a life of poverty.

From ancient voices like those of Aristotle and Seneca to the thoughts and ideas of modern men like Galbraith and Thoreau, the message remains consistent. The real value of life has no relation to wealth and possessions. In fact, it is the consensus of these great thinkers and philosophers that the opposite is true. The hunger for wealth and the struggle to keep it prevents man from growing spiritually and becoming a positive force in the world.

Western civilization, especially the United States, is cited as having created a false sense of what a satisfactory and fulfilling life is. The super-wealthy and influential have established standards of living that are contrary to nature and in the end destructive not only to themselves but to the destitute of the world and even to nature itself. The important things in life are free and are gifted to man by nature.

For the first time in history, there are currently no teachers or philosophers to warn man against his self-destructive path. However, new "teachers" have evolved such as genocide, terrorism and pollution, which will prove to be the strictest of disciplinarians. Mankind will soon be forced to face the inevitable—that the only way to peace of mind and the truly satisfactory life is by focus upon that which is fundamental to man's survival—rejecting wealth and recovering from avarice and self-destructive egoism in favor of the simple life.