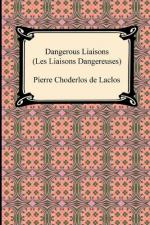 Les Liasons Dangereuses, by Choderlos De Laclos is an erotic tale of deceit, betrayal, and seduction that has existed through time as one of the most controversial novels in European history. The Vicomte de Valmont and the Marquise de Merteuil are two wealthy individuals in high society who take great pleasure in showing their power over their lovers, and who choose cruelty and deceit over the passion of true love. Valmont, a suave and charming man, takes aims to seduce the virtuous Madame de Tourvel, the wife of a prominent judge. His goal is not to shake her foundations of religious faith, but to use that faith, and her own virtues, to ensure her complete demise. Merteuil, on the other hand, seeks revenge against the Comte de Gercourt, and devises a plan to corrupt his soon-to-be young wife, Cecile Volanges. She uses a young music teacher, Chevalier Danceny, to occupy Cecile's time, and employs Valmont to seduce the young woman, thereby corrupting her appropriately.

Merteuil herself plays confidant to both Cecile and Danceny, thereby ensuring her plan is a success. But when Valmont begins to earnestly fall in love with Tourvel, Merteuil begins to become jealous, and she and Valmont begin a battle of the sexes that ensures their demise. Valmont falls prey to Merteuil's plan to trick him into breaking his affair with Tourvel. As Tourvel becomes deathly ill as a result, Valmont begins to destroy Merteuil by removing her lover, Danceny. Merteuil, for revenge, sends letters to Danceny, showing Valmont's seduction of Cecile. When Danceny hears of this, he duals Valmont, and succeeds in killing him. However, Valmont, in his last act of cruelty, gives Merteuil's letters to Danceny, which show everyone of her treachery. When Danceny passes these letters, Merteuil is driven from society. Tourvel dies soon after Valmont, Danceny leaves Paris, and Cecile joins a convent. Merteuil is stricken with smallpox and disfigured, as well as made poor through the loss of her reputation.

The novel shows clearly the dangers of illicit behaviors, and the harm that can come both from love under false circumstances and from love that exists only to harm another. Laclos, while writing in a libertine manner, appears throughout the novel to show that promiscuity and immoral behaviors are, while accepted in general society, the downfall of man, and are punished by the outcome that always rises from such behaviors. Thought in different periods to be a knock against religion, politics, high society, libertine morality, and even thought by some to be based on true events, Les Liasons Dangereuses is, regardless of message, a wonderful novel about the danger of love, and the true nature of humanity.