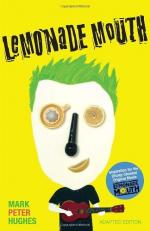 When five students who don't know each other meet in detention, one of them spontaneously starts to play along to a jingle on the radio. When the others pick up instruments, join in, and start to sing along, a crazy synergy comes into existence among them. The music teacher, who's running the detention, is impressed by the rare and unique fusion. She convinces the five students to work together as a band and when they start to get really popular, they upset the settled order in their school, where only a few students are popular, and only the adults make decisions that affect everyone.

The five students who meet in detention are all sensitive students who don't fit in with the popular group. Charlie is a bit of a dreamer, who hears the voice of the twin brother who was born dead; Mo is a high-achiever who plays bass; Stella is a misfit who just moved to Rhode Island from Arizona; Wen (for Wendell) is a moody young boy whose father is in the midst of remarrying; and Olivia is being raised by her grandmother, since her mother left, and her father is in prison. They all end up in detention for various reasons, but when the music teacher leaves the room to take a phone call, they all start jamming to the tune of the jingle on the radio. When Mrs. Reznik returns, she stands in the doorway, stunned by the synergy she has just witnessed.

Mrs. Reznik calls the five students into the basement music room the next day, and tells them that she has signed them up for the Talent Show. She says they have a gift, and appeals to their desire to stand out from the rest of the student body. There is some tension in the school between the popular kids, who play sports and the other kids, whose clubs are all located in the basement. These kids know each other by their affinity for Mel's Lemonade, as there is lemonade vending machine in the basement.

When the group gets together to practice, Stella takes charge, but the other kids don't appreciate her taste for political music. They are about to walk away when Wen starts to play on the trumpet, and they all fall into place around his sound. This is the First Lemonade Mouth Miracle.

The band gets their name when Stella stands up for another student by spraying lemonade all over the popular bully who's harassing him: he says he wasn't doing anything, but Lemonade Mouth sprayed him. Lemonade Mouth has made some enemies with Mudslide Crush, the popular band made up of juniors and seniors. They are used to playing all the gigs themselves, and resent Lemonade Mouth's intrusion on the stage at the Halloween Bash.

When the Bash comes, though, Lemonade Mouth impresses everyone, and they close their set with a political statement about the state of the lemonade machines, which have been removed because the school signed a funding deal with a soda company. This brings down the wrath of Mr. Brenigan, the assistant principal, and he bans the band from playing at the Holiday Talent Show.

The band nonetheless gets gigs at Bruno's Pizza, and in spite of setbacks and obstacles, rises in popularity. Their music gets onto the radio station (the AV kids had recorded the concert at the Halloween Bash) and now Stella has ambitions to play in the Catch A RI-Zing Star talent contest.

All the while, the five band members are troubled by insecurities or unrequited affections, and while none of the five get together, just yet, Olivia has a thing for Wen, and Charlie has a thing for Mo, and as things develop, these crushes start to seem plausible.

The novel builds toward the Catch A RI-Zing Star talent show, which takes place in the Providence Civic Center, which holds 14,000 people, and will be broadcast on TV. Every one of the members of Lemonade Mouth has a disaster before this show. Mo gets sick; Charlie, the drummer, scalds his hand; Wen, the trumpet player, busts his lip; Olivia, the singer, screams herself hoarse; and Stella, the ukulele player, gets the whole band arrested for obstructing the delivery truck that was replacing the lemonade machine with a soda machine.

When they get to the Civic Center, to top it all off, someone sits on Stella's ukulele, and when they go on, they only play for a minute before the start to walk off stage. Their fans all stand up and start singing their song, though, and what could have been a disaster turns out to be uplifting, as the band's message. Stand up for yourself and be proud of yourself gets carried by the fans themselves.

The novel closes at Wen's father's wedding, where Lemonade Mouth is playing for the reception. The band mates have coupled up (only Stella is unattached) and they don't know what the future might be, but they have seen how one song can change things.