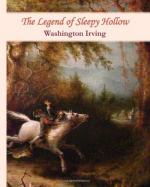 Compare & Contrast The Legend of Sleepy Hollow by Washington Irving

Washington Irving
This Study Guide consists of approximately 66 pages of chapter summaries, quotes, character analysis, themes, and more - everything you need to sharpen your knowledge of The Legend of Sleepy Hollow.

1810s: Women's bodies are thought to be attractive if they are, like, Katrina Van Tassel's, "plump as a partridge." Many women think it is vulgar to be thin enough that the shape of their bones is revealed.

1990s: Women are expected to be thin. Defined cheekbones are a mark of beauty.

1810s: Few people in a rural village are educated enough to teach school. Most people are not able to read and write. Therefore, teachers come from outside, often from the cities.

1810s: Veterans of the American Revolution are still alive, and enjoy telling true and exaggerated war stories at social occasions...

More summaries and resources for teaching or studying The Legend of Sleepy Hollow.

The Legend of Sleepy Hollow from Gale. ©2005-2006 Thomson Gale, a part of the Thomson Corporation. All rights reserved.