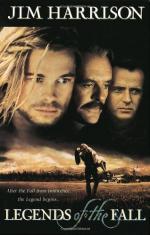 Jim Harrison
This Study Guide consists of approximately 44 pages of chapter summaries, quotes, character analysis, themes, and more - everything you need to sharpen your knowledge of Legends of the Fall.

Legends of the Fall Summary & Study Guide includes comprehensive information and analysis to help you understand the book. This study guide contains the following sections:

This detailed literature summary also contains Topics for Discussion and a Free Quiz on Legends of the Fall by Jim Harrison.

Revenge begins after a rich husband, Tibey, finds out about his wife's affair. Tibey attempts to warn and bribe his tennis associate Cochran, but Cochran is so full of love for Miryea that he fails to recognize or respond to the warnings. Tibey beats Cochran badly, and leaves him on the road for dead. Tibey also takes revenge on his cheating wife. He keeps Miryea on heroin at a whorehouse until she becomes coherent enough to stab a man. Then Tibey moves Miryea to an asylum run by nuns, where Miryea wastes away. A local man rescues Cochran, who recovers at a mission. Cochran sets out to find Miryea and convince Tibey to let them be together. It takes him time to find her, and by the time he does, she is almost dead. Tibey forgives Cochran, but Miryea dies.

The Man Who Gave Up His Name follows Nordstrom from college, through his marriage to Laura and their divorce many years later, to a summer he spends with his daughter, Sonia. During the vacation, he thinks about quitting his job and giving away all of his money. When Nordstrom's father dies, he decides to go through with the plan after his daughter's graduation from college. A tall black man and his Italian friend disturb the graduation dinner. Nordstrom kills the man who comes to threaten him. Nordstrom looks around until he finds a small seafood restaurant in Florida where he becomes the cook with a very different life than he had once had.

In Legends of the Fall, three brothers join the Great War together. When the youngest brother, Samuel, dies in the war, the middle brother, Tristan, damns God. Tristan marries his fiance, Susannah, before Samuel's funeral, but leaves her a few months later. He spends seven years at sea trying to console himself over Samuel's death. The oldest brother, Alfred later marries Susannah and becomes a senator. Tristan finally returns to his family's Montana ranch, and marries Isabel Two, the half-breed daughter of the ranch foreman. Tristan and Isabel Two have two children. Tristan gets involved with smuggling liquor during Prohibition, leading to Isabel Two's death and causing problems with a crime ring out of Seattle. Tristan kills two of the Irish brothers, and when the third comes to the ranch for revenge, Ludlow kills him. Susannah kills herself over losing Tristan.

More summaries and resources for teaching or studying Legends of the Fall.

Legends of the Fall from BookRags. (c)2022 BookRags, Inc. All rights reserved.