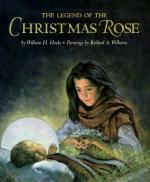 The Legend of the Christmas Rose Historical Context

Selma Lagerlöf
This Study Guide consists of approximately 42 pages of chapter summaries, quotes, character analysis, themes, and more - everything you need to sharpen your knowledge of The Legend of the Christmas Rose.

When Lagerlöf wrote the story in the early 1900s, Skåne, a province at the southern tip of modern-day Sweden, belonged to Sweden. However, the story takes place in the twelfth century—as evidenced by the real-life, twelfth-century character of Archbishop Absalon. In the twelfth century, Skåne was a Danish province. In fact, Lagerlöf's narrator refers to the Danish setting of the story when describing the audacity of Robber Mother. "It was obvious that she was as certain she would be left in peace as if she had announced that she was the Queen of Denmark."

It is important to understand Christianity at this time in order to grasp the historical context of the story. At this point in history, Christianity was the dominant religion in Europe, including Scandinavia. Sweden did not fully let go...

More summaries and resources for teaching or studying The Legend of the Christmas Rose.

The Legend of the Christmas Rose from Gale. ©2005-2006 Thomson Gale, a part of the Thomson Corporation. All rights reserved.