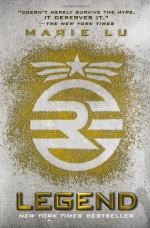 Marie Lu
This Study Guide consists of approximately 48 pages of chapter summaries, quotes, character analysis, themes, and more - everything you need to sharpen your knowledge of Legend.

Day is asleep. He dreams about something that happened when he was a little boy. He had been playing street hockey with his brothers when the puck (which was a balled up piece of paper) had gone wide and struck a police officer in the face. The officer had picked up Day and beaten him with the baton, only stopping after Day’s mother and father offered him all of the money they had. On top of that the officer had taken their dinner, too. Later, John had told him that the police office hadn’t beaten him because of the ball in the face. He had beaten him because of the look on Day’s face.

In the present, Day snaps awake and realizes where he is. He worries about John and that he is the reason that...

More summaries and resources for teaching or studying Legend.