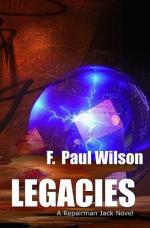 F. Paul Wilson
This Study Guide consists of approximately 43 pages of chapter summaries, quotes, character analysis, themes, and more - everything you need to sharpen your knowledge of Legacies.

This detailed literature summary also contains Topics for Discussion and a Free Quiz on Legacies by F. Paul Wilson.

Legacies by F. Paul Wilson is the second novel that centers around Wilson's highly-acclaimed character, Repairman Jack. In this installment, Jack helps Dr. Alicia Clayton discover the secret hidden in her childhood home. Alicia, an infectious disease specialist, who works with children infected with AIDS, is in the middle of a legal battle over the contents of her father's will and her right to maintain ownership of her father's home. The more Jack learns about this legal battle and the unusual actions of Alicia's father and half-brother, the more determined he becomes to help her. Legacies is a novel that attacks some very dark subjects and manages to come out of the darkness with humor and a deep sense of humanity.

Alicia is set to meet with her lawyer to discuss the latest in her legal battle over her father's will when she witnesses her lawyer's car explode. Alicia runs away, afraid to speak to the police, convinced that her lawyer's death is somehow her fault. When Alicia arrives at her office, she quickly learns that this day is going to get worse. Someone has stolen all the toys collected for the children at the clinic where she works, the Center for Children with AIDS. Alicia calls the police but knows that her case will not be a high priority for the overworked detectives. It is then that Gia DiLauro, a volunteer at the Center, comes into her office and suggests that she use the services of a man named Jack.

Alicia is doubtful that one man can do something the New York City Police Department cannot. However, Alicia agrees to allow Jack to search for the toys. A day later, Alicia arrives at work to find that all the toys have been returned, and the man who stole them is behind bars. Alicia is impressed. Alicia decides to ask Jack to help her with her personal legal problems. Alicia arranges to meet with Jack where she tells him how her father died and left his entire estate to her. Alicia, who has been estranged from her father for many years, at first, did not want the estate. However, Alicia decided that perhaps she could sell her father's house and use the money to help the Center. It was then that her brother contacted her and offered to buy the house for millions more than it was worth.

Alicia tells Jack that she does not want to sell the house to her brother, now or ever. When her half-brother, Thomas, realized this, he started legal proceedings to contest the will. Alicia knows that her half-brother cannot afford to do this on his own and must have some backers. This fact causes Alicia to wonder what Thomas is hoping to gain by owning the house. Alicia's curiosity, however, is lessened by her desire to simply get rid of the house. Alicia asks Jack if he will burn the house down. Jack tells her he will think about it.

In the meantime, Jack takes on the case of Jorge, an immigrant who owns a janitorial business. Jorge has a customer, a business man from the same country as Jorge, who refuses to pay his bill. Jorge attempted to get his money through legal channels, but the customer learned that Jorge employs illegals and has threatened to go to immigration if Jorge does not drop his request for payment. Jack tells Jorge he will get the money for him. Jack runs a scam on this customer that results in more than four times the money Jorge needed. Jack gives Jorge his money and then donates the rest, minus his fees, to the Center for Children with AIDS.

Jack checks out Alicia's childhood home and decides he cannot burn it because of its proximity to surrounding homes and businesses. When he tells Alicia this, Alicia hires another man to burn it. However, this second man is caught by the security patrol, who Thomas' backers have hired to watch the house and is killed. When Jack hears about this, he agrees to help Alicia without pay. Jack wants to know what is so important about that house. Jack and Alicia sneak into the house and find that Thomas and his friends have already carefully searched it. However, Jack manages to find a key they missed, and Alicia finds a remote control car that appears to be programmed to go to a specific location.

Jack takes both the key and the car. Jack finds the bank where the key opens a safe deposit box and finds pictures that explain Alicia's hatred of her father, but have little bearing on the case. Jack then takes the remote control car to a friend. This friend takes the car apart and realizes that it is powered by broadcast power. Jack puts that together with what he knows about Thomas and his backers and realizes that the car is the key everyone has been looking for. The car will lead them to the transmitter that powers the car and holds the secret to a power that has the ability to change the world.

More summaries and resources for teaching or studying Legacies.