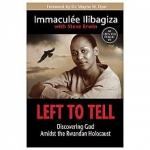 Plot Summary
+Chapters Summary and Analysis
The Eternal Spring
Standing Up
Higher Learning
Off to University
Returning Home
No Going Back
The Pastor's House
Farewell to the Boys
Into the Bathroom
Confronting My Anger
Struggling to Forgive
No Friends to Turn To
A Gathering of Orphans
The Gift of Tongues
Unlikely Saviors
Keeping the Faith
The Pain of Freedom
A Letter from Damascene
Camp Comfort
The Road to the Rebels
On to Kigali
The Lord's Work
Burying the Dead
Forgiving the Living and Epilogue
Free Quiz
Characters
Objects/Places
Themes
Style
Quotes
Topics for Discussion
Order our Left to Tell: Discovering God Amidst the Rwandan Holocaust Study Guide

Left to Tell: Discovering God Amidst the Rwandan Holocaust - A Letter from Damascene Summary & Analysis

Immaculée Ilibagiza
This Study Guide consists of approximately 40 pages of chapter summaries, quotes, character analysis, themes, and more - everything you need to sharpen your knowledge of Left to Tell.

A Letter from Damascene Summary and Analysis

Reading Damascene's letter was an incredibly painful process for Immaculee. First, she knew that Damascene had been killed, and so these were his last words to her. Second, he began the letter hopeful, but then, after learning of their parents' and Vianney's deaths, the tone of the letter changed. Still, he signed it with love and Immaculee knew how he had cared for her. Immaculee would later learn that even as he was being tortured, Damascene refused to divulge the details of Immaculee's hiding place. Damascene's death was brutal but he died with dignity. Learning of his death was difficult for Immaculee and reading the letter from him brought her sadness.

(read more from the A Letter from Damascene Summary)

More summaries and resources for teaching or studying Left to Tell: Discovering God Amidst the Rwandan Holocaust.