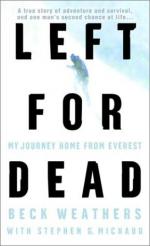 Left for Dead: My Journey Home from Everest Quotes

"Four other climbers also perished in the storm, making May 10, 1996, the deadliest day on Everest in the 75 years since the intrepid British schoolmaster, George Leigh Mallory, first attempted to climb the mountain."
Chap. 1, p. 4

"On a family vacation in Colorado I discovered the rigors and rewards of mountain climbing, and gradually came to see the sport as my avenue of escape."
Chap. 1, p. 6

"My wife was hardly finished with the harrowing task of telling our children that their father was not coming home when the second call came through, informing her that I wasn't quite as dead as I had seemed."
Chap. 1, p. 8

Left for Dead: My Journey Home from Everest from BookRags. (c)2023 BookRags, Inc. All rights reserved.