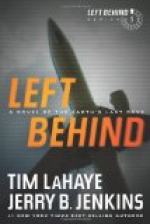 Left Behind Summary & Study Guide includes comprehensive information and analysis to help you understand the book. This study guide contains the following sections:

This detailed literature summary also contains Topics for Discussion and a Free Quiz on Left Behind by Tim LaHaye.

Left Behind is a story of transformation, faith, and salvation. The world is turned upside down when millions of people worldwide suddenly disappear. People everywhere grapple with their losses and the implication it has on the world. Many theories arise and people attempt to make sense of the events. One of these theories is that Christ has come back and raptured his church. A core group of followers at the New Hope Village Church believe that the end days are here as is outlined in the Book of Revelation in the Bible. As the Bible predicts, there will be seven years of trials and tribulations where the Antichrist will rise to power and wield his might. Many more will die before the seven years are finished, but for those that remain, they will witness the Glorious Appearance of Christ.

Directly affected are two people: Rayford Steele, an airline pilot, and Cameron "Buck" Williams, an internationally renowned news writer. Both are profoundly affected by the disappearances and both find different ways to deal with the aftermath of its affect. Rayford Steele is piloting a plane headed toward London when the rapture occurs. His mind immediately goes to his wife and son who are highly religious people. From the beginning, he knows the church has been raptured and he is left behind. Along with himself, his daughter Chloe is also left behind. As Rayford mends his errant ways, he also prays for Chloe's salvation in a desperate attempt to save her soul.

As a seasoned journalist, Buck Williams keeps an objective eye on the story, which has global implications. At the same time as the disappearances, there is a young man making a meteoric rise in the political realm. Nicolae Carpathia appears to be the answer to everyone's prayers. An enigmatic and powerful individual, he comes off as self-effacing and humble. However, as Buck's investigation ensues and he encounters Bruce Barnes and the rest of the Tribulation Force, he soon realizes that he is coming face-to-face with the Antichrist.

As each character comes to terms with their new reality, they find the strength in numbers and through prayer to persevere and prepare for battle. The ones that pray for a second chance - and receive it - persistently urge others to join them and be saved. Although not each character finds God and is "born-again", those that do arm themselves with their newfound faith and stand behind their cause; to spread the word and do what they need in order to bring about the downfall of the Antichrist.

Left Behind from BookRags. (c)2022 BookRags, Inc. All rights reserved.