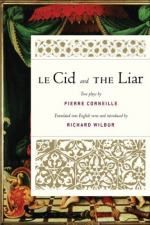 Pierre Corneille
This Study Guide consists of approximately 56 pages of chapter summaries, quotes, character analysis, themes, and more - everything you need to sharpen your knowledge of Le Cid.

Clarke provides an in depth study of the political times that surrounded Corneille as he tried to distinguish his own beliefs from the pressures that were put on him to conform to Cardinal de Richelieu's demands.

There are many versions of the legend of El Cid but also many stories that refute the legend. This book by Fletcher is an interesting study of what the author claims to be more reliable historical facts about El Cid. Although...

More summaries and resources for teaching or studying Le Cid.

Le Cid from Gale. ©2005-2006 Thomson Gale, a part of the Thomson Corporation. All rights reserved.