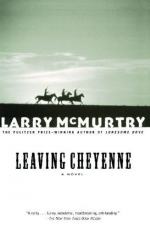 "Leaving Cheyenne" by Larry McMurtry is the story of three life-long friends who lived in a rural farming and ranching community in northern Texas. The story begins in the 1920s and concludes some forty years later. Gid Fry is a young cowboy wannabe who begrudgingly works for his father, Adam Fry, on the family's large ranch. They raise cattle and other livestock and raise crops. Adam is a dominant figure in Gid's life. His mother passed away and Gid is the only child who must do all the chores and work in the crop fields. But, in his mind, he is a cowboy and doesn't want to mess with planting and harvesting. But Adam is a wise man and knows that his son must acquire all the skills that it will take the run the ranch once it is left to him and farming is part of it.

Gid admires his best friend, Johnny McCloud who lives with his family on a nearby ranch. He's a real cowpoke and doesn't mess with plowing and planting. The two young men have been friends forever but they are very different. Gid is fundamentally more like his father - disciplined, work driven and ambitious while Johnny is free, works when he feels like it and is always looking for a good time. The boys are competitive about their cowboy skills but there is another issue that they are most competitive about - Molly Taylor.

Molly is the beauty of the north Texas community. The boys are entranced by her beautiful features and long black hair. She likes both boys and shows her affection for each but she keeps her true feelings to herself, which keeps them guessing. They both pursue her each in their own way. The serious Gid wants to marry her while the fun-loving Johnny just wants to love her and have a good time. Molly doesn't want to marry and won't be interested in getting hitched until she wants to have a baby. Gid never gives up and constantly tries to talk her into a wedding but Molly stands pat. As they mature, Gid and Johnny both become her lovers. The love and affection she feels for both never ends. When Molly finally marries, she surprises everyone.

Molly has two sons and they each have a different father. One is Gid's and one is Johnny's. When Molly tells Gid's son, Jimmy, that Gid is his real father, he rejects his mother forever. When she tells Joe that Johnny is his father, he just smiles and accepts it. Each of her sons is like his father, which is never more apparent than when she tells them the truth about their true heritage.

As World War II is underway, both boys serve their country. One of the sons is missing in action and one is officially pronounced to have been killed on the battlefield. Molly has the support of her two best friends during her time of need and mourning. Although their adults lives go in different directions, at least for a time, in the end the three friends are closer than ever. During their lives they shared much joy and much tragedy which, in the end, made their bond of friendship unbreakable.