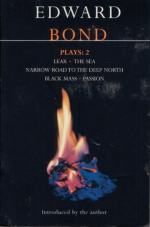 King Lear, a play written by William Shake speare in about 1605, is the Original source of Bond's adaptation In essence, Bond's play is not a rewriting of Shakespeare's play but a reaction to that text, particularly to Shakespeare's portrayal of King Lear and his three daughters.

Saved, Bond's 1965 play, also focuses on the violence of today's culture. As in Lear, Bond's use of onstage violence is extreme, but his focus this time is on the contemporary working class.

Mother Courage and Her Children, a play written by Bertolt Brecht in 1939, also focuses on the horrors of war. As in Lear, the fact that the ruling regime changes does not matter. The people continue in their poverty and degradation. Like Lear, the character of Mother Courage suffers greatly, but she does not change because of her suffering.