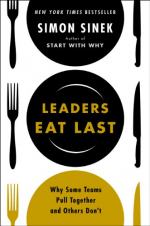 Simon Sinek
This Study Guide consists of approximately 38 pages of chapter summaries, quotes, character analysis, themes, and more - everything you need to sharpen your knowledge of Leaders Eat Last.

The A-10 pilot referred to as Johnny Bravo hovered above thick cloud cover over Afghanistan on a dark night in August 2002. His fellow soldiers were targeting a high value target and Johnny Bravo didn’t just want to hang back; he wanted to help. To assess how his fellow soldiers were faring he took the unprecedented maneuver of dropping down below the thick clouds to see how he could help.

As soon as he broke through he heard the transmission over the radio, “Troops in contact,” meaning that the soldiers on the ground were engaged in a conflict with target forces. He locked his guns on a point from which enemy fire was emanating. He held the trigger down on his Gatling gun and fired. After a breathless few minutes of radio silence, he heard excited voices saying, “Good hits! Good hits!”

That night there were...