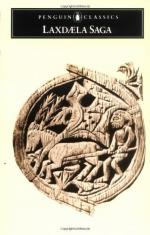 This Study Guide consists of approximately 29 pages of chapter summaries, quotes, character analysis, themes, and more - everything you need to sharpen your knowledge of Laxdaela Saga.

This detailed literature summary also contains Topics for Discussion and a Free Quiz on Laxdaela Saga by .

The Laxdaela Saga is one of the most famous Icelandic Sagas of the Middle Ages. The work is an early piece of romantic writing, with a passionate lovers' quarrel lying deep at its center, something unusual for the literature preceding it. The saga ranges over a two-hundred year period, between about 870 and 1073 A.D. in medieval Iceland and (to a much lesser extent) Norway. It follows two family lineages throughout this time, both descending from an early Norwegian chieftain named Ketil Flat-Nose, who emigrates from Norway in 890 A.D. Through his daughter, Unn the Deep-Minded and his son Bjorn the Easterner, nearly all of the major characters are sired.

Around eighty years into the saga, the three main characters are born, Kjartan Olafsson, Bolli Thorleiksson, and Gudrun Osvifur's-daughter. Kjartan is the brilliant and talented illegitimate son of Olaf the Peacock and his concubine Melkorka, the daughter of a Irish King. Bolli Thorleiksson is Kjartan's cousin, also brilliant strong and talented; his father, Olaf the Peacock's half-brother, allows Olaf to raise him, so Bolli and Kjartan grows up with Olaf the Peacock, and are the best of friends. In their youth, Kjartan and Gudrun meet and fall in love, but Kjartan is a rising star and leaves to go on a grand voyage to Norway and Ireland in order to claim prestige, riches and honor for himself. He asks Gudrun to marry him and tells her that he will be gone for three years; Bolli goes with him. However, due to King Olaf Tryggvason, then King of Norway's attempts to convince the Icelandic chieftains to convert to Christianity, Kjartan is held captive in Norway, while Bolli is allowed to return to Iceland. While there, Bolli and Gudrun fall in love and marry. When Kjartan is finally allowed to return (after Iceland converts to Christianity), he finds his best friend and betrothed married and shows little anger. He then soon marries Hrefna Asgeir's-daughter, and a feud quickly erupts between the two families, leading Gudrun, in a jealous rage, to pressure Bolli into leading an ambush on Kjartan; Bolli kills him in cold blood. Kjartan's brothers and two other men take revenge on Bolli, killing him, and then Bolli's two sons and another troop of men kill Bolli's killer, Helgi Hardbeinsson. After this series of deaths and blood feud, the feud is ended by Gudrun's mentor, Snorri the priest and the book ends by tracing the development of the remaining lineages of the Thorleiksson and Olafsson families.

The book is divided into three parts. The first part of the saga, Chapters 1-31, lays out all the necessary history, genealogical and cultural background needed for an intricate understanding of the setting, times and place of the characters. Chapters 32-56 takes the reader through the rise and fall of Kjartan and Bolli, covering the main plot line of the book. The last part of the saga, Chapters 57-78, wraps the story up by following the remaining conflicts in the Olafsson-Thorleiksson blood-feud, ending the blood-feud and playing out the stories of the descendants and relations of these families.

More summaries and resources for teaching or studying Laxdaela Saga.

Laxdaela Saga from Gale. ©2005-2006 Thomson Gale, a part of the Thomson Corporation. All rights reserved.