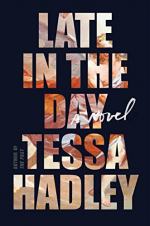 Related Topics
The Past
The Other One

Late in the Day Summary & Study Guide includes comprehensive information and analysis to help you understand the book. This study guide contains the following sections:

This detailed literature summary also contains Quotes and a Free Quiz on Late in the Day by Tessa Hadley.

The following version of this book was used to create this study guide: Hadley, Tessa. Late in the Day. New York: HarperCollins, 2019.

Set in London, the novel begins with a married couple in their 50s, Alex and Christine, listening to music in their home. The phone rings and Christine answers; it is her best friend Lydia informing her that her husband Zachary has just had a heart attack in the art gallery he owned and died en route to the hospital. In shock, Christine tells her husband what happened and then goes to retrieve Lydia from the hospital. She consoles Lydia, who does not know how she will go on without her husband, on whom she relied for all manner of practical and emotional support. Alex drives to Glasgow, where Zachary and Lydia's daughter Grace is an art student, to inform Grace of her father's death. When he returns to London with her, she is consoled by Alex and Christine's daughter, Isobel.

The novel flashes back 30 years. Christine and Lydia have just graduated college and Christine is pursuing a PhD in literature while also dabbling in art. Alex had been the women's French professor and Lydia had developed a crush on him. He was married to his first wife, Juliet, and they had a young son together, Sandy. Lydia talked her way into babysitting for Sandy and also began hanging around the bar Alex frequented with his friends. Lydia thought one of these friends, Zachary, would be perfect for Christine. Christine and Zachary did begin dating, but it soon became apparent to her that he actually liked Lydia. She told Lydia about this, reminding her that Zachary was wealthy and a wonderful man, and that Alex did not seem to be interested in her. Lydia married Zachary and Alex began pursuing Christine—whom he found to be more intellectually stimulating—shortly after he and Juliet divorced. Having been encouraged by Zachary, Christine pursued art, which she had a talent for. Back in the present, Christine had locked her studio immediately after hearing of Zachary's death and refused to work. Alex observes that his wife is more distant and quarrelsome than usual. Alex finds Lydia (who is still staying with her friends, unable to return to her own home alone) sitting up in the living room late one night and consoles her. Christine observes Lydia reading Alex's book of poems, published 30 years earlier. Zachary's funeral is held at his art gallery, Garret's Lane.

Alex's son Sandy, who is a famous musician, takes Grace out to dinner to console her. The evening ends awkwardly with Grace propositioning Sandy (whom she has always had feelings for), and Sandy politely declining and putting her in a cab. Shortly thereafter, Alex drives Grace back to Glasgow. Lydia tells Christine she is ready to try to go home for a while and leaves. Alex calls and says he will be home by midnight. Around 2 a.m., panicked that something has happened to him, Christine calls Lydia. She learns that Alex had gone to Lydia's house when he returned to London and that he and Lydia slept together. Immediately afterwards, Alex goes home, but Christine has locked him out with the deadbolt.

The novel flashes back 20 years. Zachary and Lydia have just returned from living in New York briefly, and Zachary is considering what to do with his inheritance after the recent passing of his parents. The group discusses it and all agree that he should open an art gallery. He purchases a chapel for this purpose and renovates it. After the work is done, the two couples and their children gather in the space to celebrate. After the children go to bed, the adults, drunk on wine, begin kissing and touching each other. They are interrupted by Isobel, who tells them that Grace is crying.

Back in the present, Christine interrupts Isobel's date with a man she has been seeing to tell her about Alex and Lydia. Lydia tells Alex she has always loved him and begs him not to leave her. He goes to see Christine, who finally let him in, and they discuss the situation. Christine asks Alex what he wants, and Alex responds that he does not know. A short time later, Christine attends the orchestra with an empty seat beside her, the ticket purchased while she was still with Alex. Just before the performance begins, Lydia sits there. During intermission, Lydia tells Christine that Alex has saved her and begs Christine not to end their friendship. Christine is furious at the intrusion.

In Glasgow, Grace arrives home one night to find Sandy at her door, drunk and angry about his father. She invites him in and they talk. In the morning, they make love, but Grace feels that Sandy is simply going through the motions because he feels he owes this to her.

The novel flashes back 10 years. The two couples are in Venice and Christine and Alex quarrel about Alex's constant moodiness. Alex and Lydia take a day trip to Vicenza, while Christine and Zachary go to see the paintings at Scuola dei Carmini. Zachary tells Christine he thinks often of their past together and propositions her. They return to the empty house and make love. Back in the present, Alex and Lydia move in together. Lydia finds herself reading Alex's books and thinking about things she had not thought about since college. Christine goes to an exhibition at Garret's Lane. Before his death, Zachary had told her that this particular artist's work reminded him of Christine's. Christine is unimpressed with the display, but this allows her to think of Zachary as just a fallible man again. Because of this change in perception, Christine goes home and unlocks her studio, getting back to work for the first time since Zachary's death.

Late in the Day from BookRags. (c)2022 BookRags, Inc. All rights reserved.