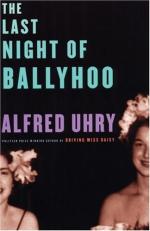 Alfred Uhry
This Study Guide consists of approximately 56 pages of chapter summaries, quotes, character analysis, themes, and more - everything you need to sharpen your knowledge of The Last Night of Ballyhoo.

Uhry's Driving Miss Daisy (1987) is the play that rocketed the author to success. Uhry won the Pulitzer Prize for this play about a southern Jewish matron's decades-long relationship with her African-American chauffeur.

Lanford Wilson's play Talley's Folly (1980) is set in the South in the 1940s. It tells of the courtship of a Protestant woman by her persistent Jewish suitor.

Many critics have compared The Last Night of Ballyhoo to Tennessee Williams's play The Glass Menagerie (1944). One of Williams's finest dramas, this play revolves around a down-and-out St. Louis family. In hopes of finding a husband for her painfully shy daughter, Amanda encourages her son to bring "gentlemen callers" home to his sister, but her plans backfire.

The Last Night of Ballyhoo from Gale. ©2005-2006 Thomson Gale, a part of the Thomson Corporation. All rights reserved.