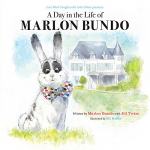 Jill Twiss and Marlon Bundo
This Study Guide consists of approximately 20 pages of chapter summaries, quotes, character analysis, themes, and more - everything you need to sharpen your knowledge of Last Week Tonight with John Oliver Presents a Day in the Life of Marlon Bundo.

Marlon's house, which he describes as old, stuffy, and lonely, is symbolic of the emotional isolation he feels at home with his family. Even though he is the Bunny of the United States and lives with the Vice-President, he does not feel love or support in his home. This represents the coldness of his family, as well as Marlon's need for love, support, and friendship outside the home.

The Stink Bug represents American President Donald Trump and is illustrated to allude to Trump's infamous hairstyle. The metaphor of the Stunk Bug, although portrayed as a specific individual, can be extended to include anyone who is in a major position of political power and who opposes difference and progressive change. The Stink Bug also symbolizes a political leader who does not reflect the values of the majority of the population, as reflected by...

More summaries and resources for teaching or studying Last Week Tonight with John Oliver Presents a Day in the Life of Marlon Bundo.

Last Week Tonight with John Oliver Presents a Day in the Life of Marlon Bundo from BookRags. (c)2020 BookRags, Inc. All rights reserved.