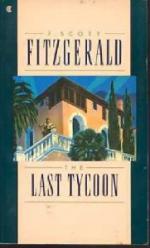 F. Scott Fitzgerald
This Study Guide consists of approximately 35 pages of chapter summaries, quotes, character analysis, themes, and more - everything you need to sharpen your knowledge of The Last Tycoon.

This detailed literature summary also contains Topics for Discussion and a Free Quiz on The Last Tycoon by F. Scott Fitzgerald.

The Last Tycoon by F. Scott Fitzgerald is a novel about a Hollywood producer who finds himself not only struggling to find love and success in a world of cut-throats, but who is in the ultimate struggle for his own life. The Last Tycoon is Fitzgerald's final work, a novel he was working on at the time of his death. The novel was published after editing by fellow writer and friend, Edmund Wilson, with the aid of Fitzgerald's notes and outlines. The novel was intended to be as compact and tightly constructed as The Great Gatsby, with a subject matter deeper and more complex than Gatsby. Fitzgerald was well on the way of accomplishing this goal. The Last Tycoon remains a testament to Fitzgerald's literary genius.

The novel opens with Cecilia, daughter of a Hollywood producer, flying home from her college in New York. Across the aisle from Cecilia are two Hollywood people, one of whom she recognizes as a visitor to her home. When a stewardess sits with Cecilia and addresses her by name, the gentleman she recognized immediately introduces himself and his companion. Wylie White is a screenwriter and his friend is a failed producer, though this is not explained to Cecilia immediately. When the plane is grounded in Nashville, the three companions decide to ride out to Andrew Jackson's historic home, Hermitage. The ride is long and quiet. Mr. Schwartz falls asleep for the first restful sleep in weeks, while Wylie flirts with Cecilia.

They arrive at Hermitage at dawn, however, they are unable to go inside because it is not open yet. Instead, Wylie and Cecilia talk on the front steps while Mr. Schwartz sleeps. When it is time to go, the newly awakened Schwartz says they should go on without him that he no longer wishes to return to Las Angeles. Wylie agrees to take a note to a fellow traveler and he and Cecilia leave. It is the next day before they learn that Mr. Schwartz committed suicide soon after their departure.

Back on the plane, Cecilia discovers that the mystery passenger that Mr. Schwartz was concerned with earlier is Monroe Stahr, her father's partner. Cecilia has had a crush on Stahr since childhood and hopes that this summer break from school will lend them an opportunity to explore those feelings.

A few days after returning to California, Cecilia goes to the studio in order to bring her father home for his birthday. While trying to convince him to leave his work, an earthquake strikes. Cecilia, her father, and his business companions go into Stahr's office. Here they learn that the earthquake has caused a water main to burst and the back lot is flooded. Stahr calls a fix-it man and they all rush out to see the damage for themselves. After a few moments, two women come floating down the flood on the head of a prop statue. Stahr is instantly infatuated with one of the women because of her resemblance to his deceased wife.

The next day, Stahr spends a busy, though typical, day at work. Throughout the day, Stahr encourages his secretary to track down the girls, finally getting one of them on the phone. Stahr asks to meet her in a public place and she reluctantly agrees to meet him at a local drugstore. The moment Stahr sees her he knows he has made a mistake. This girl looks nothing like his wife. Stahr drives her home. The girl insists that he meet a girlfriend of hers. The moment the second girl opens her front door, Stahr knows she is the woman he remembers from the night before.

The second girl refuses to agree to meet Stahr anywhere and refuses to tell him her name. Stahr goes away dejected. However, Stahr runs into the girl at a party and convinces her to meet him the next day for coffee. Stahr and Kathleen drive to Santa Monica and find their way to a house Stahr is building out there. Kathleen seems reluctant to be with Stahr, though when he takes her home she insists he take her back to the house and there they become intimate. It is not until later that Stahr learns from a letter Kathleen wrote at the beginning of the date that she is engaged to marry another man.

Kathleen calls Stahr and asks to see him. Kathleen explains about a difficult relationship she recently left thanks to the help of her fiancy. Kathleen gives Stahr a chance to tell her not to marry her fiancy, but he does not take it. The next day Stahr receives a telegram to let him know Kathleen has been married.

A week later, Stahr asks Cecilia to arrange a meeting between him and a Communist who Stahr blames for organizing a union at the studio. Stahr takes Cecilia and this man to dinner and drinks too much, getting into a physical altercation with the Communist afterward. It is after this that Cecilia finally gets her wish and she and Stahr begin seeing each other.

Mr. Brady, Cecilia's father, has become unhappy with his partnership with Stahr. Brady begins plotting against Stahr in order to force him out of the company, going as far as blackmailing Stahr over his affair with Kathleen, which has continued despite her marriage, and hiring a man to kill Stahr. In retaliation, Stahr hires a man to kill Brady. However, Stahr has second thoughts, though he cannot cancel the order because the plane he is flying on the New York crashes. Brady dies soon after Stahr leaving Cecilia without both the most important men in her life.

More summaries and resources for teaching or studying The Last Tycoon.