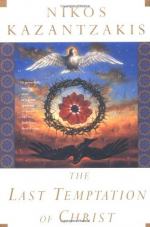 Nikos Kazantzakis
This Study Guide consists of approximately 71 pages of chapter summaries, quotes, character analysis, themes, and more - everything you need to sharpen your knowledge of The Last Temptation of Christ.

The Last Temptation of Christ Summary & Study Guide includes comprehensive information and analysis to help you understand the book. This study guide contains the following sections:

This detailed literature summary also contains Related Titles and a Free Quiz on The Last Temptation of Christ by Nikos Kazantzakis.

The Last Temptation of Christ is an unorthodox portrayal of Jesus of Nazareth battling with the responsibilities of being the Messiah. Hanging from the cross, he dreams of what his life could have been and—realizing the consequences for humanity—completes his mission by dying triumphantly.

Jesus wants not to accept the fate of being God's Messiah. He conquers all sins except fear. He builds crosses on which the Romans execute would-be Messiahs, hoping that God will give up on him but regularly feels God pick him up by the head with vulture-like talons and continue recruiting. Reviled at the Zealot's crucifixion, Jesus leaves home for a desert monastery but arrives too late for Abbot Joachim to interpret his dreams. Judas Iscariot, a blacksmith and Zealot tasked with assassinating Jesus, lets him live until they can see whether he is the Messiah. Jesus leaves, retaining the white robe.

Jesus reaches Capernaum in time to keep a mob from stoning prostitute Mary Magdalene and for the first time offers to hungry crowds simple parables. Gathering a band of followers including Judas, Jesus heads to the Jordan to let John the Baptist decide on his authenticity. With John's blessing and warning, Jesus tests himself n the desert. Learning when he emerges that John has been beheaded, Jesus adopts John's fiery message and attitude. It backfires in Nazareth, where Jesus initiates his ministry, and he settles into Capernaum for the winter, sending out disciples and himself healing the sick.

As Passover nears, Jesus preaches in Jerusalem, making deadly enemies. Raising Lazarus from the dead shows Jesus he can do anything. Through Judas, Jesus arranges with the High Priest Caiaphas the only sequence of events that can save the world. After the Passover meal, Jesus prays in Gethsemane for a reprieve but endures the blasphemy trial and Roman sentence of death. Simon of Cyrene carries the cross after Jesus' strength gives and Simon alone sees angels affix Jesus to the cross and pierce his side.

After crying out, "Eli, Eli," Jesus faints. In an instant, he dreams of a long "normal" married life with many children and grandchildren. When the disciples visit, decrepit, bitter old men, Judas calls Jesus a traitor and coward for not keeping his promises. Jesus finds himself in agony on the cross, finishes his cry, "lama sabachthani," adds "It is accomplished," and begins a new era for mankind.

More summaries and resources for teaching or studying The Last Temptation of Christ.

The Last Temptation of Christ from Gale. ©2005-2006 Thomson Gale, a part of the Thomson Corporation. All rights reserved.