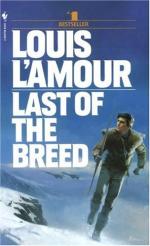 Last of the Breed Summary & Study Guide includes comprehensive information and analysis to help you understand the book. This study guide contains the following sections:

This detailed literature summary also contains Topics for Discussion and a Free Quiz on Last of the Breed by Louis L'Amour.

Last of the Breed is the journey for freedom of Major Joe Makatozi, or Joe Mack as he is called, in the sub-zero temperatures of the Siberian taiga. Mack is a test pilot for the United States Air Force, and his plane has been brought down by a Soviet Union Colonel named Arkady Zamatev sometime after the end of World War II. Mack is in a prison camp in Siberia when he is forced to return to the ways of American Indian ancestor to escape from prison and from Siberia.

During this journey, Mack finds help from others who, like Mack, are on the run from the Soviet government. Yakov is the first to befriend Mack on his journey. Yakov tells Mack of a place he can stay for the winter, the village. When Mack gets to the village he meets Natalya. Natalya Baronas and her father Stephen are two who offer to help Mack hide out during the roughest part of the Siberian winter. During this time Mack and Natalya become very close and when the time comes for Mack to move on Natalya decides to go to America with him. Now Mack not only has to escape from Siberia, but also come back and rescue Natalya and her father. Mack also has to take time out of his own escape to help his old friend Yakov who has been arrested.

As if surviving the brutally cold Siberian winter was not hard enough, Mack is being tracked by Alekhin. Alekhin is a Yakut, the Siberian counterpart to the American Indian. Alekhin knows almost every move Mack makes. Mack is consistently on the move trying to stay ahead of Alekhin. Along the way Mack leaves traps for Alekhin and his men in efforts to slow them down. On one occasion Mack causes an avalanche that kills a large part of the group that is closing in on him. Even though Mack is being tracked by hundreds of Soviet soldiers, he knows the true fight will be between him and Alekhin.

Mack and Alekhin come close to meeting several times, but Alekhin's patients' finally pays off when another tracker happens across Mack and alerts Alekhin's men. Mack is surrounded and knows there is no way out so he surrenders. After a severe beating by Alekhin, Mack still manages to escape. Even in his weakened condition Mack is still able to elude Alekhin and his men long enough to heal and make new weapons. Mack is able to secure a kayak to take him to Alaska just before he returns to the taiga to finish his business with Alekhin. In the end Mack and Alekhin have their final face off and Mack defeats Alekhin. Mack sends Alekhin's scalp to Zamatev with a warning that he will be next.

Last of the Breed from BookRags. (c)2022 BookRags, Inc. All rights reserved.