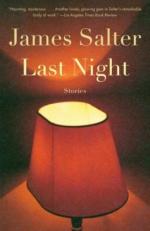 James Salter
This Study Guide consists of approximately 38 pages of chapter summaries, quotes, character analysis, themes, and more - everything you need to sharpen your knowledge of Last Night.

The first book-length study of Salter’s early works, this readable and well-organized guide provides a blend of biographical details and critical evaluations of his writing, from his early journalistic endeavors through his screenwriting successes and early novels.

Gorsuch, who holds a doctorate in legal philosophy from Oxford University and a law degree from Harvard University, is widely published on the legal and ethical questions surrounding assisted suicide. An accessible discussion of the various philosophic arguments supporting both sides of the euthanasia debate, as well as the seminal case histories in the United States and abroad, this book ultimately builds a clear but subtle argument against further legalization of assisted suicide. At the same time, however, it establishes a substantive argument for the rights of patients...

More summaries and resources for teaching or studying Last Night.