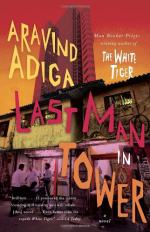 Aravind Adiga
This Study Guide consists of approximately 76 pages of chapter summaries, quotes, character analysis, themes, and more - everything you need to sharpen your knowledge of Last Man in Tower.

This detailed literature summary also contains Quotes and a Free Quiz on Last Man in Tower by Aravind Adiga.

The following version of the book was used to create this guide: Adiga, Araviind. Last Man in Tower. New York: Alfred A. Knopf, 2011.

Last Man in Tower is a novel that sets two men against each other over the ownership of a small flat in Mumbai, India. The plot is filled with devious schemes and heart-felt pleading as neighbor turns against neighbor in pursuit of the things that are most important to them. Spiraling to a tragic end, the novel provides an in-depth look at greed and how it can change the human heart, occasionally for the better.

The story begins as the antagonist Dharmen Shah, a Mumbai developer, prepares to make an offer to the residents of the middle-class Vishram Society. Mr. Shah wants to purchase the two-building property, tear it down and build a luxury high rise building called The Shanghai. Shah is determined and ruthless and does just about anything to accomplish his goals, including neglect his own health. However, he meets his match in Yogesh Murthy, known as Masterji, a retired teacher, who is not interested in large sums of money, but rather in holding on to the past and his memories of his deceased wife and daughter. Shah's assistant investigates the proposed building site and becomes familiar with its residents. With information in hand, Mr. Shah makes known his offer of approximately $330,000 per household to the residents of Towers A and B and gives a strict deadline by which to reply. Given that the average income of most people in India is roughly $8,000 per year, the majority of the residents are eager to accept the buyout offer. But there are several holdouts who have various reasons for saying, "no thank you." The Pintos want to stay because Mrs. Pinto is practically blind, but she knows her way around the building and is worried about how she would cope having to move elsewhere. Mrs. Rego, has been cheated out of money before and has seen a similar situation with her uncle; she is not ready to trust a builder such as Shah. Masterji is not only supporting his friends the Pintos, but wants to stay in his home where his memories of his wife and daughter are most vivid. And Mr. Kudwa is simply waiting a bit to make his decision. Since he heard someone call Masterji a "gentleman" for supporting his friends, he decided to not appear overly anxious to go after the money. As the buildings are cooperative societies, unless everyone agrees to the offer, the building cannot be sold. Thus the conflict.

Initially, gentle persuasion and pleading is used to get those in opposition to change their minds. Several residents, namely the building Secretary, Mr. Kothari and a resident, Mr. Ajwani, make their services available to Shah and his left-hand man to help get the answers changed to yes. Shanmugham, Shah's man, has taken care of difficult people before and uses force to get things done. Ajwani is particularly adept at manipulating people to get them to see the positive side of accepting the offer. He appeals to Mr. Kudwa to take the step and go for the money. He shows him a neighbor's new car and allows him to touch it, realizing that the desire for material things will be difficult to resist. Mr. Kudwa quickly changes his mind. Ajwani also sets another member of the society to work on Mrs. Rego, appealing to her woman-to-woman. Although she does not want to trust Shah, her longing for a better life for herself and her children wins out over her reservations and she, too, agrees to sell.

Masterji and the Pintos now become the last holdouts. Masterji rises to the occasion and employs the aid of several societal institutions that he believes will surely save them. The police, a lawyer, the newspapers, family and even former students are all tapped to plead his case. One by one each fails him and he sees that Shah's power and money reach everywhere, corrupting the very things he hoped would stand up for him. As the deadline nears, neighbors become more distant and even abusive in their interactions with Masterji. Crank phone calls from Ajwani and Shanmugham, an attack on Mr. Pinto which causes him to break his foot, and feces smeared on Masterji's door are some of the attempts to force "yes" answers. The Pintos give in to the pressure, causing a rift between them and their long time friend. On his own in the battle, Masterji becomes the last man in the tower, fighting not only against Mr. Shah, but against his neighbors as well.

After the Society members vote to officially expel Masterji from the building they believe the battle is over. But when no communication comes from Mr. Shah and the deadline comes and goes they get even more concerned. They take matters into their own hands, no longer relying on the tactics of Shanmugham. In a horrible act of betrayal, greed and loss of humanity, several members knock Masterji unconscious with a hammer and throw him off the rooftop. His death is ruled a suicide and the Society members finally get their settlement with Shah.

Two months later, most of the members are living elsewhere in upscale buildings, happy with the new lives and devoid of any remorse. But Mrs. Rego and Ajwani, who in the last moments realizes the error of his ways and finds a conscience, mourn the loss of the old teacher. They remember him as a man who stood up for his rights and held firm to his beliefs. And even though they too are living with the benefit of a better financial future, their hearts have not been corrupted by greed and they each work in their own ways to pursue honest lives and help those less fortunate.

More summaries and resources for teaching or studying Last Man in Tower.