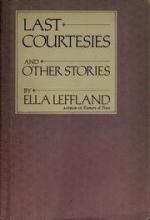 Ella Leffland
This Study Guide consists of approximately 37 pages of chapter summaries, quotes, character analysis, themes, and more - everything you need to sharpen your knowledge of Last Courtesies.

Ella Leffland was born on November 25, 1931, in Martinez, California. She attended San Jose State College, where she earned a bachelor's degree in 1953. Leffland has stated that she began writing around the age of ten, but she was twenty-eight before she had her first short story published. After that, she wrote five novels and a collection of short stories.

Leffland worked as a city hall reporter for a few years upon obtaining her college degree. Then for three years she was a copyeditor for San Francisco's Sun Reporter. She also worked variously as a typist, a sales clerk, a researcher, and as a kitchen helper on a Norwegian tramp steamer. While holding these jobs, she returned to writing repeatedly.

Leffland's writing is psychological in emphasis. She probes her characters' psyches, pushing them to reveal how their minds work. Her first novel, Mrs. Munck (1970), relates...

More summaries and resources for teaching or studying Last Courtesies.