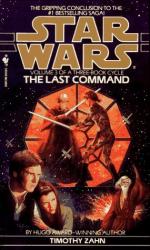 This detailed literature summary also contains Related Titles and a Free Quiz on The Last Command by Timothy Zahn.

The Last Command pits the New Republic against the Grand Admiral Thrawn in a battle for survival. Thrawn's clone production, sped up so much that insanity is guaranteed, must be ended. As Thrawn and the insane Master Jedi Joruus C'baoth vie for control of the Empire, a small band of Rebels flies to the hidden facility and destroys it. Both C'baoth and Thrawn die, so the headless Empire ceases to be a threat.

Thrawn and Joruus C'baoth vie for control of the Empire but temporarily cooperate to convince Rebels that a powerful new weapon exists. C'baoth wants only to make Leia Organa Solo and her twins his apprentices. While seeking evidence of clone shipments, Jedi Luke Skywalker runs into a smuggler, Talon Karrde, and agrees to pay him for information. Karrde's partner, Mara Jade, who has budding Force powers and is convalescing on Coruscant, tells Leia that the late Emperor's voice is commanding her to "kill Luke Skywalker." Thrawn placates C'baoth by sending a commando team to kidnap the Solos, but only succeeds in implicating Mara as an accomplice. She is jailed.

Meanwhile, Karrde seeks convened smugglers and rallies them to New Republic's side only when their meeting is raided by Imperials. Thrawn is furious, fears the consequences, and sets up Karrde for blame. Two smugglers actively avenge their friend's death by sabotaging the Imperial Bilbringi Shipyard. Karrde witnesses this and sees mysterious asteroids, which soon are "cloaked" and released as hazards around Coruscant during Thrawn's "hit-and-fade" attack. Having revealed to Leia the location of the cloning facility, Mara is broken out of jail and spirited off to Wayland just before Coruscant is closed down. Luke, Han Solo, Lando Calrissian, Chewbacca, and the droids accompany Mara on a search-and-destroy mission.

Karrde clears himself at the next meeting and learns that the New Republic thinks it can clear the skies only with a CGT array that must be stolen from the Empire. He organizes to steal one first and sell it to them. The Empire and New Republic are set up for a climactic battle at Bilbringi. Meanwhile, on Wayland, the band makes its way through threatening terrain to Mt. Tantiss and enters. Leia, having realized that C'baoth has also gone there and that the Force is disabled, gets Karrde to fly her there to warn Luke. Luke and Mara go to the throne room to find the self-destruct switch, but encounter C'baoth. Restoring the Force and disabling Mara, C'baoth watches Luke battle his clone, Luuke, and grows furious when Mara kills the latter, fulfilling her last order and setting her free. Despite C'baoth's violent efforts, Mara also fulfills his prophecy by kneeling before him—and thrusting upward with her lightsaber. Karrde's ship is standing by to fly them away before the cataclysmic explosion of the mountain. Back on Coruscant, Mara agrees to mediate between the government and smugglers, and Luke gives her his original lightsaber, which helps her leave the past behind and look to the future.