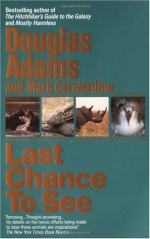 Douglas Adams
This Study Guide consists of approximately 34 pages of chapter summaries, quotes, character analysis, themes, and more - everything you need to sharpen your knowledge of Last Chance to See.

This detailed literature summary also contains Topics for Discussion and a Free Quiz on Last Chance to See by Douglas Adams.

Last Chance to See tells of humorist Douglas Adams and zoologist Mark Carwardine's travels in search of endangered species and examines the chances for these animals' and plants' survival.

Last Chance to See opens with humorist Douglas Adams on Madagascar, teamed with zoologist Mark Carwardine, looking for the nearly extinct aye-aye lemur on a government preserve. Adams and Carwardine decide to team up on a wider journey. They next meet to find the Komodo dragon, also on a government preserve. The only intrepid part of their adventure is enduring Indonesian bureaucracy and tourists. They fly next to Zaïre, endure missionaries and more bureaucracy, and enjoy a visit to the mountain gorillas at the Virunga volcanoes before finding in Garamba National Park some of the surviving northern white rhinoceroses. They hope next to see a flightless parrot, the kakapo, in Fiordland on South Island, New Zealand, but succeed in that mission on a preserve on Codfish Island.

The next step is China, where some 200 baiji dolphins are enduring sensory hell in the Yangtze River. A Conservation Committee has done an amazing job raising money to prepare a refuge, including licensing the baiji name and image to businesses. They are determined not to let the baiji go extinct in their generation. Adams and Carwardine next go to Mauritius, an ecological battle zone, where Carl Jones' captive breeding center has in ten years restored populations of kestrels, pink pigeons, and fruit bats. Jones claims to be no good at administration or politics but spends much time on both. They have difficulty getting government permission to visit near-by Round Island, "miraculously unspoilt" because getting ashore is nearly impossible. They see a Ramus mania tree thought extinct until in 1981 being protected and cuttings are being cultivated for new plants.

The trained zoologist Carwardine discusses the unknowns that determine whether endangered species survive. In the field some progress is being made, but increasing numbers is no guarantee against extinction. Every species matters because each is an integral part of its environment and one extinction can cause a series of others. Humans are affected as the sources of food, life-saving drugs, and industrial processes disappear. Nature is resilient but know one knows what the limits are. Without these species, "the world would be a poorer, darker, and lonelier place." Adams closes with a parable from the ancient Sybilline books.