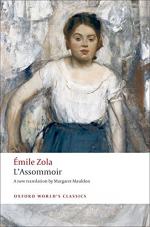 Émile Zola
This Study Guide consists of approximately 67 pages of chapter summaries, quotes, character analysis, themes, and more - everything you need to sharpen your knowledge of L'Assommoir.

This detailed literature summary also contains Quotes and a Free Quiz on L'Assommoir by Émile Zola.

The following version of this book was used to create the guide: Zola, Émile. L’Assommoir. Oxford University Press. 2009.

Grease and Lantier have just moved to Paris from Plassans, and Lantier is already showing sings of abandoning Gervaise and their two children. When he does lave, with all their belongings, Gervaise is distraught, and when she goes to work at the wash house, Virginie, the sister of the woman whom Lantier left her for, she gets in a fight with the woman. As time moves forward, Coupeau, a neighbor of hers, begins courting her, and they eventually decide to get married, in a very unromantic scene of finally caving in to his requests.

The marriage day goes poorly: at town hall, they are delayed as the magistrate is excessively late, then they go to a church where the priest seems vastly disinterested in the union he performs. Afterwards, the party goes to a museum, and is completely ignorant of the significant art mounted before them, and become bored. The dinner results in arguments and drunkenness on behalf on the whole party, a telling sign of what is to come for the newlyweds.

At first, the marriage looks promising, but then one day Coupeau falls from a roof, and is no longer able to connote his work. He begins to take to drink, and starts spending the money Gervaise earns at the washhouse. Gervaise ends up taking a loan from the Goujets, one she will never be able to pay back, in order to open a new laundry shop on the Rue de la Goutte-d’Or. Business is good, but Coupeau’s alcoholism continues to worsen, causing Gervaise to stop paying off her numerous debts to various creditors.

As business booms, Gervaise becomes reacquainted with Virginie, with whom she begins spending much of her time. The peak of the novel is Gervaise’s saint’s day feast, where she invites family, staff and friends to her little shop for a feast fit for kings. However, Lantier shows up to the dinner, and in the time following, becomes fast friends with Coupeau, eventually moving in to their apartment. As Coupeau comes home drunk more and more regularly, Gervaise ends up sleeping with Lantier again, as she is so disgusted by her husband’s filthy state.

The family begins to fall apart, and Gervaise’s business begins to fail, as she longer cares about her customers and treats them with contempt. Even Madame Goujet, who gave her the loan to start the business in the first place, stops giving Gervaise her business. The Coupeaus are forced to transfer the lease to Virginie, a plan hatched by Lantier, who stays in his room the whole time, and ends up taking Virginie as a mistress, just as he had done with Gervaise. The Coupeaus are forced to move to a small, dingy room on the sixth floor of the same building, and from here, everything goes downhill.

First, Coupeau’s drinking habits have literally made him insane, and he is repeatedly committed to a psychiatric ward. Nana, a teenager now, leaves with men in order to escape her drunken household. Gervaise has taken to drink as well, and as Coupeau’s state worsens, and there is no money in the household, she is forced to try and prostitute herself for food. Coupeau dies in the hospital, during a fit, and Nana has fled, never wishing to see her parents again. Gervaise dies in a nook under the stairs, forgotten by her neighbors, a fate Zola saw as all too common among the working poor.

More summaries and resources for teaching or studying L'Assommoir.